Rai Guerra has worn many different hats. He’s performed in drag as Christy Girlington and most recently as Amber Alert; he is the owner/creator of the Asbury inFamous line of clothing as well as the owner/creator of Sir Beard and Body. His newest role is that of Mr. New Jersey Leather 2018, having been crowned at the annual New Jersey Leather Family event in Asbury Park.

“It’s been on my bucket list for the past five years or so,” Guerra said of running for the New Jersey Leather title. “But I’ve been in two long term, vanilla relationships and I’ve had to suppress my leather/kinky side, put it in the closet. Three years ago, my marriage fell apart and that was when I started doing more in the community and doing things that made a difference.”

Guerra has been making quite a difference with his Asbury inFamous clothing line. The idea for the product started when he served on the board of advisors for Project R.E.A.L, a drop-in center in Asbury Park that services young gay and bi-sexual men. On a broader scale, Project R.E.A.L also offers programs to all youth across the LGBT spectrum. 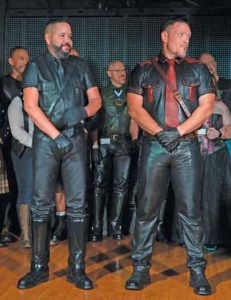 “I did it as a way to bring awareness to the drop-in center because I’m over 40 and the target demographic is 13-29,” Guerra said. “It looks a little odd if I’m in a high school recruiting people, so I thought, how do I get the word out? I literally had this design in my phone, I made it on an app on my way to work when I used to commute to New York and I didn’t know what I wanted to do with it. I thought, why not put this on a shirt? I took it to a mall kiosk to get it made, I wore it out to the bars and everyone asked about it. So I got with a friend of mine who owns a small business and I said ‘hey, can you make me two dozen of these?’ and I literally thought I’d only sell the two dozen. A portion of the proceeds went to Project R.E.A.L and, more importantly, it raised awareness and got the word out.” 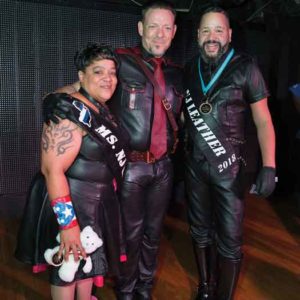 Asbury inFamous offers hooded sweatshirts, baseball caps, baby onesies and tote bags, as well as the original t-shirt design that started it all on the web site. February will mark two years since its inception.

“I started with two dozen t-shirts styles and now I’ve got different styles of shirts, tote bags, fitted caps, etc. From time to time, I do a limited-edition Asbury inFamous shirts. The logo doesn’t change but I did one for breast cancer and the proceeds of that went to the Susan G. Komen Foundation. I did an alternatively heterosexual one that everyone loved because of the current administration and the proceeds from that shirt went to the Human Rights Campaign. There’s a lot of different charities that will benefit from variations on the inFamous brand but biggest benefactor will always be Project R.E.A.L.”

Guerra’s other venture is Sir Beard and Body, a line of beard conditioners that he created in his kitchen. He personally hand makes, seals and ships every order. “I started mixing essential oils and I came up with this scent, which is leather based,” Guerra said. “It’s a combination of leather, suede, sandalwood, and tobacco. I wore it out to Sinner Sunday (a NJ Leather Family event) and Sal (Susino) was like, ‘what are you wearing? That smells amazing’ so I told him and he suggested I make it into a beard product. So I went on Pinterest and looked up a recipe for beard balm. I produced a batch on my stove and my countertop, assembly-line style, and started selling it. Since it was Sal’s idea, I donate a portion of those proceeds to the Leather Heart Foundation. Everything I do, it’s better for my soul if it has some charitable contribution attached. Otherwise, why do it?”

Guerra has found inspiration for giving back to the leather community from the work being done by Susino and his partner Dion Daly, the owners of Dragonslair Productions and producers of the New Jersey Leather contest. One of the many charities that benefit from the contest and other events put on by Dragonslair is the Leather Heart Foundation, which gives financial assistance to those in need in the leather community. As Mr. New Jersey Leather, Guerra wants to continue his charitable work by expanding the Asbury inFamous line and work with LGBT drop-in centers throughout the state.

“I want to continue the legacy of Sal and Dion, working for our community and for those in need,” Guerra said.

As part of his title year, Guerra’s goal is to expand the visibility of Leather identified people within the LGBT community as a whole.

“My intentions during my title year is really to bridge the gaps between the leather and vanilla communities because I spent so many years — 23 years — in vanilla relationships putting my needs and desires aside,” Guerra said. “But mainly I just want to bridge that gap and let them know that it’s okay if you’re into leather, if you’re kinky — we’re here! I’m planning different leather invasions in random bars that wouldn’t normally have a leather night so we’ve got a part of the community going to, say, Feathers in North Jersey which isn’t really a leather bar and be like, “hey, we’re here, this is what we do.”

Guerra — and his alter ego Amber Alert — can be found co-hosting Queens Against Humanity at Georgie’s in Asbury Park with Pissi Myles, as well as at other upcoming leather events.

“I did it (drag) once, for Halloween, which is like a gateway drug for drag,” Guerra said. “I was like, ‘people make money like this?’ I got my first booking in a bar called Uncle Charlie’s in New York and I got booked to do two numbers and I was like, ‘this is kind of cool.’ I’ve been doing it ever since. When I moved to Asbury, I kind of took a break from drag because my ex at the time was also a drag queen, so I didn’t want to take attention from him and let him do his thing. The next time I did drag was for a benefit so I thought, I think it’s time to bring her (Christy Girlington) back out and I’ve been doing it ever since.

“I did stop as Christy about a year ago and (Ms. New Jersey Leather 2016) Christy Lee’s benefit (to help offset medical costs due to a cancer diagnosis) was the last time she was out. I stopped doing it because I needed to grow a beard since I have the beard product line. It’s just awkward when you’re trying to market your stuff and you’re clean-shaven. People were asking about Queens against humanity and Pissi didn’t want to do it with anyone else because we have great chemistry. So I was like, ‘how do I get around this?’ and I came up with Amber Alert. She’s a bearded drag queen.”