The Paper Mill Playhouse invited the press to a dress rehearsal in New York on November 14 for “Oliver!” This will be one of the largest casts Paper Mill has ever had, yet one of the smallest rehearsal spaces. With a cast of 49, there wasn’t much space for cameras and reporters. Shane Austin Miller, director of press relations, introduced Mark S. Hoebee, who directs the musical, and is also the the playhouse’s producing artistic director. 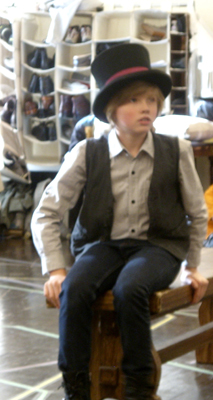 At rehearsals for Paper Mill Playhouse’ “Oliver!” All photos by Ralph Malachowski.

“Food, Glorious Food,” was the first number. Sung by the workhouse boys, it is especially poignant when it is sung during Thanksgiving and Christmas. The kids had their complex choreography down pat.

Next, a solo number from this production’s Oliver, 11-year-old Tyler Moran. Cute as a button, Tyler sang poignantly and with graceful assurance.

This was followed by a production number featuring Fagin (David Garrison), The Artful Dodger (Ethan Haberfield, from Tenafly), and Oliver (Tyler Moran) with the boys. 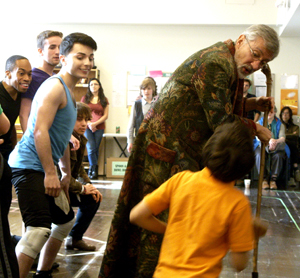 The fourth number was a drinking and dancing scene with the adults. It was a sexy, spirited affair.

After the cast and crew posed for a picture, it was my good fortune to run into two of the cast members, Patrick O’Neill (Swing/Dance captain) who was changing his shoes at a table while chatting with his colleague, David Hess (Mr. Brownlow). They graciously allowed me to photograph them.

On our way out, we waited for the one elevator which was working, since the building is undergoing extensive renovations. Jessica Sheridan (Widow Corey) joined us in the wait, only to have the twins from Cranford, New Jersey, 10-yr-old Ryan and Lee Rosenthal join us in the elevator with their guardian. The boys told us that many think they don’t look alike, that they must be friends, not twins. We disagreed on that. We also were informed that rehearsals for this production started in late September. Amazing what a few weeks’ practice could do. When one considers that so many children are involved, it makes the achievement all the better.

Adapted from Charles Dickens’ classic, “Oliver Twist,” Lionel Bart created the book, lyrics, and music for “Oliver!” An iconic Broadway musical, it opened in 1963, and was nominated for ten Tony awards.

The show is now playing through December 29 at the Paper Mill Playhouse. For more information, visit: www.papermill.org/.

Sign-up for the Affordable Care Act in Jersey City

Two Jersey City LGBT artists will be featured this weekend