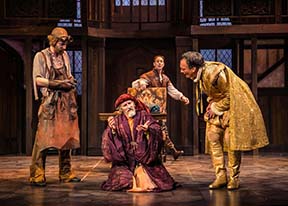 A finalist for the 2013 Terrence McNally New Play Award, “A Most Dangerous Woman” “celebrates the transformative power of art.” Written by Cathy Tempelsman, it also won other awards, which brought it to the attention of the Shakespeare Theatre. It is not often that a new play, especially one celebrating the life of an English novelist, has an established director like Richard Maltby, Jr., whose credits include “Ain’t Misbehavin,” “Fosse,” and as co- lyricist “Miss Saigon.”

Who was George Eliot? Many may ask the question, while others may vaguely remember the name as the author of such novels as “Silas Marner,” “Middlemarch,” “Adam Bede,” and “The Mill on the Floss.” To many high- school students, these were books to be avoided on the lists of required summer reading. So it is no surprise that the playwright herself read her first George Eliot novel fifteen years ago, when she was already an adult.

A scene from “A Most Dangerous Woman” at The Shakespeare Theatre of NJ.

Why did George Eliot need to use a man’s name? Since women were typically not taken seriously as writers, Mary Anne Evans published under the name George Eliot. As Templesman writes in her note on the production, George Eliot wrote about how things are, about real people, not about how they might be. This has infuriated feminist critics who are puzzled by how Eliot lived an unconventional life, yet wrote about everyday people. Critics believe that she should have written stories about how resourceful women could change their lives and make the world better. Eliot did not believe this was possible and derided women writers, like Jane Austen, who wrote in happy endings for her heroines. Eliot wrote about the limitations of gender expectations, and how they were a trap for many lives. Eliot was notoriously unattractive, intelligent, and independent, and, that being the case, had little chance of marrying, so she led an unconventional life.

Her design for living put her at odds with her brother when she first lived with a journal editor, his wife and mistress, and later with a married man as his mistress until they both started calling each other husband and wife. Rob Krakovski played Eliot’s brother with all the mendacity necessary for the role. Aedin Moloney was brilliant as George Eliot. Her energy and commitment in the role were unflappable. She was onstage for most of the play in a demanding role. Ames Adamson was the perfect George Henry Lewes, Eliot’s long- time companion, revealing a multi- faceted, human character. As a matter of fact, the entire cast showed brilliance and resilience in multiple roles. The other excellent cast members were: Sheffield Chastain; John Little; Deanne Lorette; Devin Norik; Andy Paterson; and Meg Kiley Smith.

To be honest, I had my reservations about seeing “A Most Dangerous Woman.” I feared it would be a cold, dry, academic exercise about a dusty literary figure. I am happy to say I was pleasantly surprised. I give credit to the cast of accomplished actors who gave their all to bring their characters to life. Mr. Maltby, the director, should be given credit for his excellent work. Kudos definitely should go to Ms. Tempelsman, the playwright, for a fine, new play.

At two hours and fifteen minutes, it is a rather long play. It might have been stronger to end the play with Eliot’s meeting Princess Louise, rather than the extra ten minutes afterward. Judicious editing of the rather long vignettes from Eliot’s novels illustrating scenes pertinent to Eliot’s life could also benefit the play. As beautifully as they were performed, many audience members would not know the references, and deleting a few might make for a faster, tighter play. Of course, if the aim of the play is for school groups, then one would understand the many and varied scenes from the novels.

Once again, the Shakespeare Theatre of New Jersey has a hit with their excellent play, “A Most Dangerous Woman.”

Scar Letters is well worth the effort

A tale of two governors

Terrific ensemble acting was without fault at Two Rivers Theatre