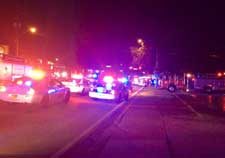 It’s been a few months since a terroristic madman massacred 49 innocent partygoers in cold blood and injured 53 others at Pulse nightclub in Orlando, and while the pain of the largest mass shooting in U.S. history is still fresh for many of us, some of the smoke has cleared, giving way to a more rational perspective.

Without the Everest-level emotions that flooded our collective consciousness in the immediate wake of the attack, thus distorting our cognitive thinking — and fueling our rage — we can now take a step back from one of the deadliest days in American and LGBT history to appreciate what has risen from our slain brothers’ and sisters’ ashes. Like these seven positive side effects.

1. It Lit A Fire Under Our Asses to Pursue More Aggressive Gun Control Measures

Every time a notable mass shooting takes place —“noteable” being the operative word here since most mass shootings don’t get the coverage they deserve — social media erupts in a spectacular mushroom cloud of pro- and anti-gun rhetoric from both sides of the political fence. For days after the Orlando killings, your friends and family weighed in with their opinions on gun control, primarily focused on the infringement of Second Amendment Rights, more stringent background checks, banning military-style weapons altogether, and how to keep guns out of the hands of those who are already suspected terrorists. Alas, most of that jibber-jabber is lip service for posterity (though perhaps necessary for the grieving process), since the majority of those social-media soapboxers won’t do anything worthwhile to defend their position outside of bitching about it on Facebook and Twitter.

Yet there are still a few people out there fighting the good fight.

Many of my own friends (and yours, too) signed petitions, joined rallies, and reached out to their local politicians begging – no, demanding! — reform. Certainly nothing did or will change overnight, but at least those cries were heard: Connecticut Democratic Sen. Chris Murphy, a staunch gun-control advocate, led a nearly 15-hour filibuster in the Senate a week after the attack, and a day-long Democrat-led sit-in drew 170 lawmakers to the House floor to push Congress to vote on two proposed gun-control measures a week later. Neither effort was successful in swaying Republicans to enact common sense, but the issue is now front and center, and it’s not likely to go away until at least a compromise is met.

2. It Humanized Us to Some of Those Who Previously Demonized Us

While those ridiculous, radical Baptist pastors of the Internet were foaming at the mouth at the thought of our slaughter — and what a surprise their Judgment Day will be as a result — the early-morning events of June 12th gave people we know who we didn’t think were our allies, who opposed our “lifestyle,” or were otherwise indifferent to our plight cause for pause. I can’t promise you that those who previously demonized us or disagreed with our sexual orientation have done a complete 180, but I can tell you, at least in my personal experience, that hearing about sons, daughters, mothers, brothers, and sisters being hunted down like animals simply because they’re LGBT or our supporters did serve to humanize us to some of those who didn’t quite understand us. Perhaps their awakening was because they were faced with the reality that it could have been me or you—somebody they love and care about — in the club that night, or maybe they finally realized that the killings were the deadly manifestation of a society that still harbors so much homophobia. Either way, their sentiment was palpable, and it could be the sign of a turning point in not only LGBT culture but also American culture.

3. Our Communities Came Together to Support Our Own

I’ve only been out and proud for 15 years or so, and while the LGBT community has had hurdles to overcome long before I was born in 1981, there’s arguably been no other single tragedy that has devastated us so much as this one,  which is why it was comforting to see, in the aftermath of Orlando, that the title of “LGBT community” lived up to what that’s supposed to mean.

In my area of New York City and the Jersey Shore, candlelight vigils were hosted hours after news of the killings broke; fundraisers and benefits were underway; and our bars and clubs were open for business, serving as safe havens — as they always have been — to convene and mourn with “family.” At my home near Asbury Park, Paradise nightclub raised more than $20,000 in a single evening to support victims, a massive feat for a small community that came out in droves for its own.

4. Our Allies Came Out in Full Force to Support Us

Along with our LGBT brothers and sisters, our straight allies were right beside us mourning death and celebrating life as each passing day exposed new information and greater pain. That support was most visible on social media, through messages of condolence and the alteration of profile photos to signify that they stand with us. Each of us probably has an anecdote about at least one straight ally in their life that lent an ear or a shoulder as we grieved. Mine regards a friend who sent me a small care package from LGBTQ Concierge, filled with goodies and accompanied by an uplifting note of solidarity and strength. It was a touching reminder to me that none of us are in this alone, and we should appreciate more those who help us fight oppression despite that they really don’t have to.

5. America’s Inclusive Corporations Solidified Their Status as Friends of Dorothy

Sure, providing humanitarian assistance and showing financial support during a national crisis is good for public relations, but let’s put that cynicism aside. Instead, we should feel honored that we have corporate allies who will risk backlash from some of its consumer base to give when it’s needed most. Pledges came in fast and furious following the tragedy, including $1 million from the Walt Disney Co.; $500,000 from Darden Restaurants; $400,000 from the NFL and Florida’s three NFL teams; and $100,000 from JetBlue, which also flew victims’ family members to Orlando for free. At press time, the Pulse Victims Fund, created by Equality Florida, had reached $7.26 million.

I also think it’s important to point out that a local Orlando Chick-fil-A franchise opened its doors the day of the tragedy — a Sunday, a day when it’s traditionally closed — to feed the long line of locals waiting to donate blood to the victims. Maybe it’s time to forgive the company for president and CEO Dan Cathy’s foolish comments against same-sex marriage. Can’t hold a grudge forever.

6. Pride Celebrations Returned to Their Roots of Visibility and Activism

I’ve been a vocal opponent in my writing over the years of the sexualization of Pride — parents shouldn’t have to explain to their children what a dildo is during a parade – so it’s refreshing to see that this year’s festivities have returned to their roots of visibility and activism. As an LGBT community, we should demonstrate our diversity and dedication to fighting for equal rights instead of our favorite bedroom positions as we invite the communities in which we live to celebrate one love in one world. It’s too bad that the reinstatement of real LGBT values isn’t under better circumstances, but we’ve got to start (over) somewhere.

7. We Finally Told the World We’re Not Gonna Take It — Anymore

If the Orlando tragedy did anything for our community, it made us fucking mad. So mad that we’re not going to take it — anymore. We’re not taking anymore guff or discrimination or bullying or conversation therapy or religious domination from anybody, ever again. Enough is enough. Forty-nine of us were mowed down for existing, and that isn’t and never will be acceptable. We must always remember that, and you must always keep being you. Stay loud, stay proud, and stay vigilant. The Pulse victims did not die in vain, and it’s our duty now to prove that until we live in a society where we’re treated as equals and no less — because