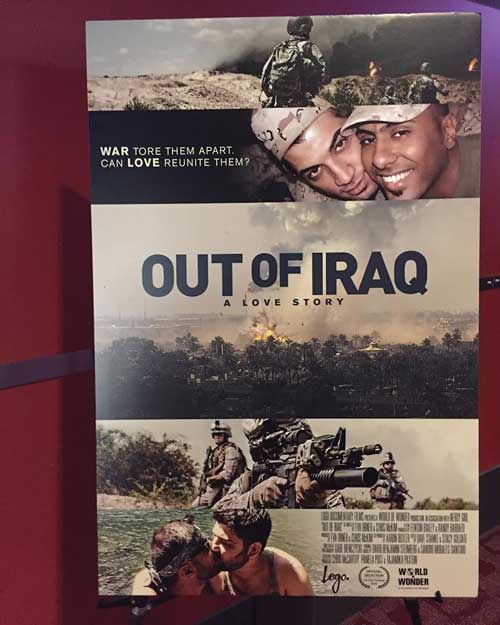 Logo’s release of its documentary film Out of Iraq puts the true purpose of protest marches and pride celebrations in their proper context. Academy Award winning director Eva Orner takes us into the heart of Iraq to the complicated life of Nayyef, an artist and a trained interpreter who is gay.

How do you come out in a culture that not only doesn’t support you, they would kill you if you acted on your authentic self? Logo is now in the second year of their Global Ally campaign that brings to light the stories of activists around the world and highlights how it truly takes courage to live your life as you were intended.

Ramadi, Iraq, 2004 was a dangerous place for anyone to be, but that much more so for someone who is raised to think that homosexuality is a disease. This is Nayyef and Btoo’s experience. Even after meeting one another and recognizing the attraction, the chemistry between the two of them, they were both afraid to confess their love for one another. Yet, they did. Whenever one would go on a mission, Btoo worried Nayyef would be killed, and if captured the Iraqi soldiers helping the Americans were considered traitors and the translators would be killed first.

Nayyef dressed like an American soldier and had to take an American name, David, for his protection, while embedded with the American troops. Btoo did not know David wasn’t his real name. It was the death of Nayyef’s sister that helped them confess their love for one another and move to their relationship to a level of truth. Against this backdrop, a video of a gay man’s birthday party where other gay men were celebrating went viral, and religious extremists tortured and killed the entire party to make examples of them.

Under worsening conditions for translators, Nayyef applies for a special immigration visa with the help of the U.S. Military. He endures an emotional parting with his mother and an even more emotional parting with Btoo. How does it end? You need to see it for yourself and keep the hankies close. We are more connected to one another than ever, and Out of Iraq  shows us just how much.

See it on Logo or order on DVD. www.LogoTV.com

“House of Cardin”: The house that roared

‘Dick Doc Deux,’ “Johnsons” is the follow-up to “All Male, All Nude”

The struggles in the movie “Parched” are universal