Pride Live, a social advocacy and community engagement organization for the LGBTQ+ community announced its third annual Stonewall Day. It is a global campaign to elevate awareness and support for the Stonewall legacy and the continuing fight for LGBTQ equality. 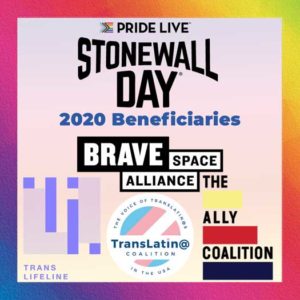 On Friday, June 26th, Stonewall Day will present a virtual fundraising event to raise funds for four LGBTQ organizations. The groups have been severely affected by COVID-19 pandemic The  event will highlight the need for fair and equal treatment under the law for all say organizers from Trans LifeLife, Brave Space Alliance, TransLatin@Coalition, and The Ally Coalition.

The livestream event will partner with WarnerMedia, Nasdaq, and Pride Media. It will run from 12:45 pm to 3 pm EST on Logo’s YouTube and Facebook pages. Stonewall Day will include a special message to the LGBTQ community from President Barack Obama.

Stonewall Day is a national day of awareness to commemorate the anniversary of the 1969 Stonewall Riots. This year’s event will speak out in support of #BlackLivesMatter and address LGBTQ issues including the violence facing transgender women, especially Black trans women.

“COVID-19, and the recent events that have placed a national and global spotlight on the need for fair and equal treatment for all people,” said Dr. Yvette C. Burton, President of the Pride Live board of directors. “It has impacted so many around the world and the LGBTQ+ community has not been immune. This has resulted in vital and life-saving LGBTQ+ organizations having to severely amend their budgets and programs. Our hopes are Stonewall Day can assist our beneficiaries in continuing their work and service to the community.”

“From Marsha P. Johnson’s revolution at Stonewall, to the recent murders of Dominique Fells and Riah Milton, the protection of trans people of color continues to be the litmus test of freedom and equal opportunities,” continued Burton. “Policies such as the  Trump administration’s reversed protections for transgender people in the U.S. health care system, adds the disproportionate effect of fatal violence, impacted by the intersections of racism, sexism, homophobia, biphobia, and transphobia across communities and families.”

Central to this year’s event is a Text2Give campaign, with proceeds benefiting four Stonewall Day beneficiaries. Simply text REBEL to 243725 to donate to the Pride Live Stonewall Day fund. When prompted, reply YES to confirm the donation.

Organizations that will receive funds from Stonewall Day 2020 include:

Trans Lifeline: Trans Lifeline connects trans people to the community, support, and resources they need to survive and thrive. Due to #COVID19, their peer-support Hotline and Microgrants are particularly needed as trans people disproportionately face isolation and economic insecurity.

There will also be a Stonewall Day Virtual Happy Hour from 5-6 pm PST, hosted by Stoli Vodka and The Abbey. For event details, visit the Facebook site.

The Newark Gay Pride 15th Anniversary will be an online event