If the sensational documentary Paris Is Burning helped shine a light on the ballroom scene of New York City, then the revolutionary and amazing FX show Pose has put them front and center on stage. The entire cast of the show is giving a perspective on different sides of the ballroom experience of the late 1980’s/early 90’s in New York City, and MJ Rodriguez’s “Blanca” is showing us a different side of a woman who finds herself as a member of the House of Abundance, then coming into her own, and taking on her own family as the mother of the House of Evangelista.

I sat down for a chat with MJ Rodriguez, and we talked about what it is like being part of a show that is telling stories that are well over due to be told, what it is like working with icons like the divine Billy Porter, and how playing a certain iconic Broadway role helped her come into her own as the gorgeous woman she always truly has been. 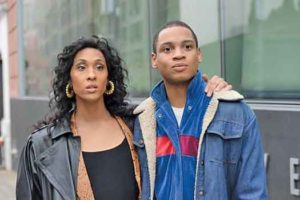 You and some of your cast are on a recent cover of Entertainment Weekly magazine and your show Pose is one of the most talked about shows this summer. What does it feel like?

MJ Rodriquez: It has been insane. I could never have imagined being on that cover and my wildest dreams have come true.

What has been the strangest encounter that you have had with a fan so far?

MJR: You know, I haven’t really had any strange ones, just some really loving and endearing ones so far. For example, there was one woman outside of one of our shoots. This woman had three small children, and I was about to go in and start shooting. Something compelled me to go over and speak with her. I could just tell how much she loved the show, but she was also a mother; and my character Blanca is a mother on the show. I wanted to make sure that she knew that I was trying to be a light for all mothers out there who are raising kids, and trying to raise them well. She cried a little bit, I hugged her and then I went back in and finished shooting.

What is it like being part of a show that is completely revolutionary in so many ways?

MJR: It means a lot. It actually means more to me than really anything. Not only are our stories being told in ways that they really need to be told, but people are finally getting to see us in the light, and how it really was in 1987. How these women built platforms and stepping-stones for the women to live today. The revolution is only starting when it comes to women of our experience. Hopefully we end it off in a beautiful light and in the right way.

What is your own relationship personally to the ball scene, which is the backdrop for where all of the stories branch off of?

MJR: You know, Pose has taken such care in making sure the depiction is authentic, even using members of the ball culture in almost every scene. As far as how I relate to the ball scene, I was someone that was part of the ball culture at 14 years of age. My housefather at the time found me when I was in high school. He saw that I was walking and that I was voguing, and at that time, he had already had a couple of kids who were in my high school. He saw me and immediately said, “that’s my daughter.” We immediately started rehearsing and the rest is just history.

You are getting to work with some amazing talent on Pose, both established award winners as well as some people just breaking through. Billy Porter, for example, has won a Tony and a Grammy award and plays Pray Tell, somewhat of a fairy godmother/godfather type, but with a serious dose of shade, as he also is the announcer for all of the balls. He was recently on Watch What Happens Live and had some absolutely lovely things to say about you. How does that make you feel when you hear someone of his caliber speaking so highly of you?

MJR: Let me tell you something, that is my heart. Billy has known me since I was 19 years old. He was a co-director of Rent when I was playing Angel. We met there and we completely clicked, and I totally looked up to him. That man was just an icon to me. Then I followed him throughout his career through Rent to Kinky Boots and everything else he did, just to be a part of what he was doing. Not only is he someone that is part of the revolution as well, but he is someone that I love and connect with. It is a dream to be working with him. Did I mention that he is an icon? (Laughs)

Speaking of Rent, you played Angel and it is arguably one of the most important roles in Rent and really delivers a great deal of the emotional punch of the show. Why was it so important to you that you play Angel?

MJR: When I was still in high school, I was still going to the balls and I got the opportunity to actually see the Rent movie. I saw the play when I was younger, but the movie is what made everything really come to full fruition because it was on a much broader scale. After I saw that, I told my dad, “that’s me.” He told me “in due time.” As time trickled on, people had told me that I should play Angel. I had denied it for so long. I did not want the world to see me that way. And I thought that they would push me aside and make fun of me and throw slurs. When I turned 19, I didn’t care and I decided that the people were going to see me. When I got the opportunity to do it Off-Broadway, I was at the precipice of my medical transition. At the age of seven I had already known that I was a girl. Then I got to a point where it was time for the tomboy phase to end, it was time to take my hair out of a bun, and put on some lipstick! It was really just as simple as that; Rent did that for me. It let me live out loud and see the woman that I was on stage. It only pushed me forward to me who I am today.

So much of what Blanca goes through sounds like exactly what you have gone thorough as well.

MJR: Absolutely. I have been through a lot of trials and tribulations and when I was in high school, I got bullied and it so happens that the bully became my friend. Still, I was being bullied in front of a whole bunch of people, though. I was also bullied when I was in elementary school and in kindergarten; it followed me throughout my life. But I was always a person that stood up for myself. I was not confrontational physically, though, I let my words be my double edged swords and I kept pushing forward. I always say, “Your words are your strongest weapon and then afterwards come our actions.” I led by example with my words and then I will let my actions follow. You have to let people know how you will and will not be treated; you don’t have to be mean about it, but you have to let them know in the most upfront and real way.

Pride month just ended, but now more than ever, we have to have pride every day of the year. What right now is giving you the most amount of pride?

MJR: What is really giving me pride is that the show is finally airing. And that people are getting to see an aspect of the “T” that is part of LGBT. People are now going to see our stories. They are going to see how African American women of the trans experience cultivated the ballroom scene, and why we have so many kids today doing what they want to do in the ballroom scene. That makes me most prideful. It’s not just us either. It just shows that we were a part of that movement and how it can bring all of us together, not just in our own community, but in communities outside of the ballroom scene.

Justice Smith for all