Jessica Kirson will perform at Highland Park High School as a fundraiser show for The Pride Center of New Jersey. Originally from South Orange, New Jersey, Jessica has worked with Robert DeNiro, Howard Stern, and she will be in the upcoming season of HBO’s Crashing.

Jeff Kagan: We’re very excited about your upcoming show on October 6 at the Highland Park High School. Yours is not a very common profession. What led you to become a comedian? 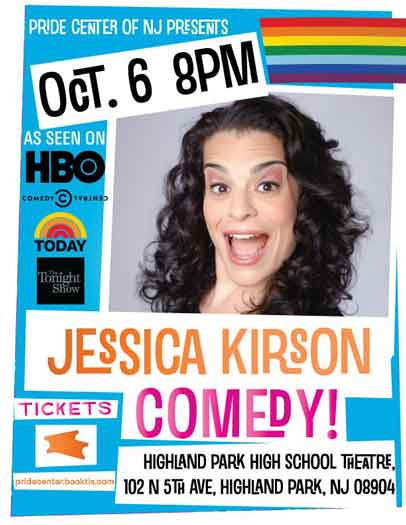 Jessica Kirson: I was always the class clown. I went to school to get a Masters’ in Social Work. One day my grandmother called me over to her. She was watching me for a while as I was sitting with my siblings and cousins. We were all laughing a lot. She said, “You need to be a comedian. Every time you’re sitting with people, they’re laughing.” So, I ended up taking a comedy class and performing at the end. Even though it was very hard, I fell in love with it that night!

Who were your major influences in comedy and why?

JK: Lucille Ball, Carol Burnett, the comedic actors on Saturday Night Live. I loved how silly they were, and the fact that they took risks.

In your opinion, what makes something funny?

JK: So many different things can make something funny. I do believe it takes a little time to be able to laugh at something painful.

You do a lot of characters in your act. Are these characters based on people in your life? And if so, what do they think about being part of your show?

JK: All of the characters are based on people I know in some way or another. I was always good at imitating people and taking on their characteristics. I can watch someone or just be in their company and start imitating them. Most people love being part of the show.

Let’s talk a little bit about you and your family. You’re married! You’re an out lesbian. What was coming out like for you?

JK: Thank God coming out for me was not as difficult as so many of the stories I’ve heard. My family was very accepting and loving. I personally had a very hard time with it and it took me a while to accept who I was. I cared so much about what people thought and I felt like I was letting a lot of people down.

Saturday, October 6th., Jessica Kirson has a fundraiser show for The Pride Center of New Jersey. Tickets are available at pridecenter.booktix.com

PCNJ hosts “Pride Experience” at The Club in Woodbridge

Valentines Day Gala for PCNJ will be held in Woodbridge