An Ohio native, Nikki Wireman moved to the Garden State in 2010. She has always liked to draw. “As a little girl, I would draw Wonder Woman,” she says. She would notice the “little nuances” of the world around her, the moments of tenderness between same-sex couples. Fascinated by them, she’d then capture those moments, those nuances, in her drawings. “It got me in trouble with my parents,” Wireman recalls.

“I grew up during the AIDS crisis [when AIDS] was called GRID [Gay Related Immune Deficiency], and also gay cancer. And remember the cocktail?” She said that many pharmacies in her small town, in Ohio, did not keep HIV medications. So, individuals who needed the meds had to drive for several hours to reach the closest major city, and get their life-saving medications.

Wireman’s mother, an RN, would help those who could not make the long drive to the nearest city. “A friend of mine was in town from New York for the weekend,” the artist recalls. “He had no one who could give him a shot, and his partner didn’t know how to do it, so he called my mother. This is how AIDS came into my home and into my heart, and it’s been there ever since.” Her mother would try to make the best of the situation. “She wouldn’t just give the patient the shot, but would make sandwiches and try to “make the event a positive event, because [those who needed her help] were [already] scared, hurt, and being treated [badly].”

Nikki Wireman decided to become a paramedic and firefighter.

Watching her mother help individuals living with HIV/AIDS, Wireman decided that she wanted to help people, too. She decided to become a paramedic and firefighter.

She believes her knowledge, as a paramedic, of human anatomy, has influenced her artwork. She used her “technical study” of the human body to create art. “I know what a hand looks like, a face, muscle groups,” she explains. “So, while I sketch someone’s hand, I go from the technical to the creative side.”

“I remember when I came out, I went to this leather bar, a gay bar,” she mentions, speaking of one of her art pieces called Always. “I walked in and saw these guys, in leather pants. One had a harness on. And Madonna’s Falling Star came on.” And that was the moment when she said, “I’m them, I’m a gay woman.” She wanted to draw them in that tender moment, right when they were about to kiss. To this day, Always has remained one of her favorite images.

Nikki Wireman, competed for Ms. New Jersey Leather 2014 and won. It continued herstory and her interest in art. Wireman drew Resist while watching the votes being counted on the 2016 presidential election night. “I couldn’t handle it, and I started sketching a woman [with] a lipstick.” But then, the lipstick became a knife, giving an even more powerful edge, and mood, to the drawing. Wireman ended up drawing this beautiful, mysterious woman who was “trying to keep silent. But silence is deadly, and I was thinking about us [the LGBT community], how we’re forced to be silent, especially with this administration, yet we have the control.”

Another image shows three women with their fists in the air. [HER]story was inspired by the events surrounding Gay Pride in Columbus, Ohio. “People showed up at Black for Pride, and did a peaceful protest,” Wireman explains. “The police swarmed in on them.” She adds, “The J on the woman’s neck, that tattoo [is for Janet Jackson.] I love Janet Jackson. [She] brought up the awareness of racism and systematic oppression.”

When living in Ohio, Wireman worked for a newspaper for a time. “That’s when I learned that I was a liberal,” she says, laughing. “They tagged me a liberal. I had no idea what that was, and had to look it up.” That’s also where she learned about photomechanical transfer and pointillism. Since then, she has been using dots, painting one dot at a time. The process has helped her tune in with the art she’s creating.

Nowadays she draws using micro pens. Sometimes she uses her smart phone to capture something interesting, something she then draws and turns into art. She also uses poetry, and words, to sketch out an idea for her visual artwork.

The leather community inspires her art

Nikki Wireman was Ms. NJ Leather in 2014. The experience has inspired and allowed her to capture subtle nuances in her work. “I don’t want to be intrusive, I want to be supportive,” she explains. “In the leather community, we’re sexual rebels. It’s not about pain, but the power of trust and submission, [about] the freedom [that comes with it.] And that has inspired my art, and that’s why most of my art is BDSM-related.”

Revisiting the purpose of art, and of her art, in particular, she adds, “We’ve got to record our — leather, LGBT — history, [because] they’re trying to erase us again. So be fearless, be defiant, be open and be humble, and keep our history alive.” 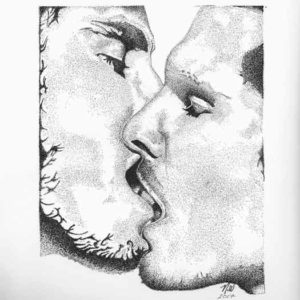 Avram Finkelstein talks about HIV, art, activism, and the pandemic

Truth and purpose through art and activism

NJ artist Marlon Davila is doing what he loves

Art, activism, and the award-winning documentary, “The Archivettes”

The topic the Black Church dares not speak of honestly