Forget Jack and Diane. Eleanor and Alexia is the couple to watch in Kate Lane’s first feature film, Fear of Water. Now in worldwide distribution on DVD and digital, this film shows us that no matter where you begin, what’s important is where you end up.

Both Eleanor (newcomer Chloe Partridge) and Alexia (Lily Loveless) are two of a kind, more so than they can even imagine. Eleanor has every advantage—she attends boarding school during the year and looks forward to spending the summer at home. When tragedy strikes, Alexia comes to Eleanor’s rescue and a bond is formed. 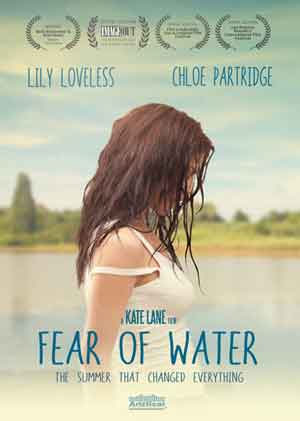 When we first come out to ourselves, the world looks and feels different — sometimes special, sometimes dangerous, and almost always exciting. Eleanor and Alexia both have family issues, and both are in that amazing magical and enervating time of awakening and there’s that brief moment where Eleanor thinks Alexia may be the only other lesbian she’ll ever meet, and fortune favors the bold. Right?

But the world is bigger and much, much more complicated than it seems. And families have more secrets than the children will ever know, until some find their way to the surface.

Fear of Water is clearly a first feature film for Kate Lane — the transitions are a bit choppy, and the story line jumps around a bit, but the affect of the work is one of discovery, and the magic that is wrought by a change in perspective at the exact right time.

The seeds of change are always within us; can we transcend our past to create our future?

Check out Fear of Water now at ariztical.com/filmsAZ/fear_of_water.html