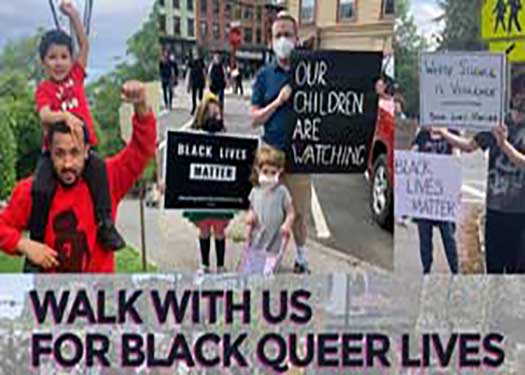 A protest march is scheduled for Sunday, June 7 at 2 pm

A coalition of most of New Jersey’s LGBTQ and ally organizations in Northern New Jersey will lead a march and rally in support of #BlackLivesMatter this Sunday. The march and rally will raise awareness of racial injustice, systemic racism and white privilege in the queer community that has gone unrecognized, unowned and unchallenged say organizers.

Walk With Us For Black Queer Lives is scheduled to begin on Sunday, June 7 at 2 pm. The route will begin at Ivy Hill Park (Mt. Vernon Place and Seton Hall University, in Newark, NJ). It will proceed down South Orange Avenue to a planned rally at South Orange Village Center.

Organizers urge everyone to practice social distancing and to wear a mask or face covering. Those who want to hold signs can make their own or download sign templates at: tinyurl.com/yapyhjtr

Statement from the organizers:

We in the queer community understand that before we can do anything to dismantle white supremacy around us, we need to dismantle white supremacy within us. For decades, white queer organizations from the local to the international level have centered and amplified the voices of white cisgender queer people, while diminishing or ignoring the voices of Black leaders. Yet, the modern queer liberation movement was forged by Black and Brown transgender people through protest and activism, beginning with the bravery of Marsha P. Johnson and Silvia Rivera, who led the Stonewall Uprising 50 years ago.

Despite this, we acknowledge that racism and transphobia exist within the LGBTQ+ community. Far from remembering the origins of our movement as a response to police brutality, many queer organizations have been silent or have gone as far as to partner with police, illustrating a stark lack of awareness of the violent treatment by law enforcement of Black queer people—who are literally dying to be free.

We also acknowledge that to proclaim #blacklivesmatter is to proclaim that the lives of all Black people matter, including the lives of Black transgender people, who have been the targets of violence so disproportionate as to lead the American Medical Association to label the trend “an epidemic” last June. Last year alone, our community lost more than 25 transgender people to violence—the vast majority of were Black women. And the most recent loss of our brother Tony McDade, shot and killed by police in Tallahassee, Florida, painfully highlights the vulnerability of Black trans folks at the hands of both vigilantes and police.

We must turn our mourning into anger and action. At this time, this collaborative group of organizations acknowledges the vital importance of Black voices in queer organizing.

Intersectionality in the LGBTQ+ movement must be intentional and it must be an explicit commitment that organizations and individuals make to:

Additionally, we recognize the survivors of violence who have often gone on to participate in the intersectional fights of queer, trans, and racial liberation themselves. The cisgender, queer white community has been complacent for far too long. Now is the time to stand up and be counted.

Creep of the Week: Mark Chambers

What, to Black America, is this 4th of July?

Creep of the Week: Racism