Dozens of LGBT media publishers converged on the Mile High City of Denver at the end of August for the 2017 National Equality Media Association (NEMA) conference.

Publishers were picked up from the airport on Wednesday, August 23, with the help of OUT FRONT, Denver’s queer media outlet, and High End Transportation, a line of Teslas that allow cannabis consumption. Freshly touching down in Denver, NEMA attendees were amused by the novelty of cannabis cars, even if they didn’t partake.

Events were hosted by Visit Denver, who were happy to accommodate the needs of all present and share info about Denver’s rich, eccentric culture. They invited along some of their LGBTQ consultants to make the tour as queer-friendly and inclusive as possible.

NEMA kicked off with an official meet-and-greet reception at the Curtis Hotel. Publishers mingled, talked LGBT media, and, despite being tired and possibly jetlagged, enjoyed a spread of wings, hot dogs, mixed drinks, and Colorado beers — the perfect combination of good, old-fashioned Southwestern hospitality.

“NEMA rocks; I am so glad to be here because I love the fact that I’m connecting with people who may or may not have heard of us,” said Damian Pelliccione, CEO and co-founder of REVRY, a TV app that allows for the streaming and searching of queer television content. 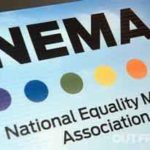 “I want to get to know the other people here and get their years of advice so I can have best practices,” said Steven Evans, editor in chief of Out Clique mag.

We all love a good party, but the work had to start sometime, and by Thursday morning, everyone was ready to learn from the carefully curated sessions.

First up was an advertising strategy panel “Stop Negotiating on Price!” followed by “Video Content, SEO & Ad Serving,” which dealt with online content, and “The 3M Strategy” after lunch. These were topics that were on everyone’s minds, as small-time queer publishers try to navigate the world of ad sales and still turn a profit with technology dominating the way we share our content.

“I am getting a significant education in the needs of the LGBTQ media,” said Howard Barbanel, vice president and director of marketing for Design2Pro, a company that provides design services to media companies. “Everyone has been exceedingly nice; I’ve found the people here to be more pleasant than those who work in other media fields, more collegial.”

Later that night the group was invited out for a cocktail reception, VIP city experience tour, and publisher’s dinner. The tour stopped by the Museum of Contemporary Art, a few of Denver’s iconic locations, and a dispensary (welcome to the Mile High City) before culminating in a dinner at Acorn, the upscale restaurant located in the River North neighborhood’s new marketplace, The Source.

“I didn’t expect the city to be equally as charming as the people,” Imani Greene, representative of her marketing company, Greene Group, stated from a patio on the Visit Denver tour. “The people are kind; they look you in the eye. There is an elegance in how they represent themselves. I think it’s unique for a city this big to also be so charming. There’s also a sense of no judgment coming from people, which I love.”

Friday dawned bright and early, with another sponsored breakfast, this time brought to NEMA by The Media Audit, CVC, and Media Radar. A National Brand Panel followed breakfast and gave publishers a chance to discuss how they brand their media and why they make editorial and advertising choices. Motivate Media sponsored the lunch following this panel, and then the last major discussion, the Social Media Influencer Panel, officially brought the conference’s academic schedule to a close.

“As a 33-year-old publisher it’s important for me to be responsible and form relationships with people who have been doing it for a long time,” explained Garrett Pattiani, co-founder of qlife magazine, a publication based in Las Vegas, Los Angeles, and New York. “The more we are connected, the better we are to carry out their legacies. I find their experience and histories to be very valuable.”

“NEMA is important because all the publishers get together in a niche market,” said Peter Frycki of Out In Jersey magazine. “We all have similar interests and challenges, and it’s a great chance to pick each others’ brains.”

NEMA was declared a success by those in attendance, who enjoyed plenty of food, alcohol, and legal cannabis in Colorado and learned a lot from the expansive repertoire of panels offered on different topics. The connection and dialogue between the publishers was easy and natural, and everyone seemed thrilled to connect, learn, think, and grow against the backdrop of the beautiful Rocky Mountains.

“I think what I found most powerful about NEMA was Jerry’s [Cunningham, OUT FRONT’s publisher], assertion that people will get tools, but none of that will help if people don’t use the time between sessions to dialogue with each other,” Greene said. “This industry allows people to connect and coordinate more than other industries, and we should take advantage of that.”