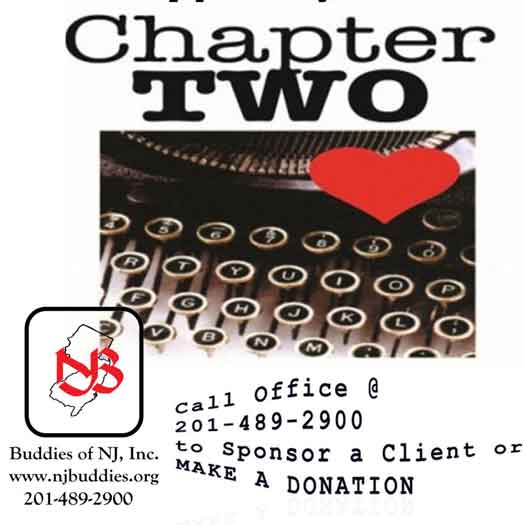 The AIDS services organization Buddies of NJ will celebrate it’s 32nd Anniversary by presenting “Chapter 2” a Bergen County Players Production of a Neil Simon Play at the theatre in Oradell.

“You’ll enjoy this production as a fun night out with lite refreshments — a nice way to remember Our Anniversary,” said Buddies of NJ organizers. The special show will be on Thursday, June 1.

This play is Neil Simon at his autobiographical best. It is based on his own courtship of actress Marsha Mason following the death of his first wife. The play is a transitional moment in his development as a writer, in which he focused more seriously on relationship drama. But being Neil Simon, he can’t help but make it warm and hilarious along the way. “Neil Simon is at his best here. There is nothing in the script that is dated by time. All of the conversations… are just as vital, urgent, funny and hurtful now as when they were written. The witty repartee and comedic rhythm of Simon is all there,” said Talkin’ Broadway.

Transgender activist Abby Stein will be in West Orange