Most people up until now would recall Murder on the Orient Express, Agatha Christie’s mystery set on a luxury trans-European express train, from the 1974 film adaptation starring Albert Finney as Belgian detective Hercule Poirot. However, this first stage adaptation ever of the 1935 novel, currently being offered by the McCarter Theatre Center in Princeton, not only keeps most of the suspense intact but also discovers a streak of farce in the interactions between ten strangers trapped together on the fabled train.

Stage adaptor Ken Ludwig is best known as a master of farce. His multitude of comedies include Lend Me a Tenor and its sequel, A Comedy of Tenors (which recently played at the Paper Mill Playhouse); Moon Over Buffalo (which starred Carol Burnett); and the libretto for the Tony-award-winning musical Crazy for You. While he might not be the person you’d think of when looking for a Christie adaptation, surprisingly Ludwig keeps the flavor of the best of Christie’s plotting and the atmosphere of between-the-wars Europe, all the while bringing in enough humor to make this version of Murder on the Orient Express a fresh revelation to admirers of the original work. 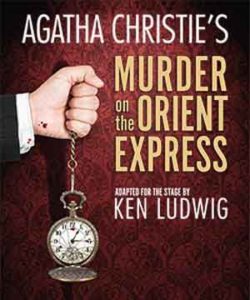 The challenge of performing in this sparkling play is well-met by the cast, led by Allan Corduner’s portrayal of Hercule Poirot, the Belgian detective charged with discovering who among his fellow-passengers is a vicious murderer. While the entire cast deserved the standing ovation it received, special credit should go to Julie Halston as a vulgar (for its era) American widow; Veanne Cox as an aged Russian princess; Max von Essen as a Scots colonel of Her Majesty’s troops in India; Evan Zes as the manager of the Orient Express; and Alexandra Silber as an enchantingly beautiful Hungarian countess who doubles as a medical doctor. Credit here also goes to Emily Mann, the Artistic Director at McCarter Theatre Center, who skillfully guided the cast through the twists and turns of Ludwig and Christie’s glamorous mystery.

An all-star production team complements the acting and the play perfectly. Beowulf Boritt’s scenic design, especially his spectacular rolling train set, conjures the images of the great trains that criss-crossed Europe. William Ivey Long’s costuming is pitch-perfect in setting a visual tone of mixed classes and befitting styles of dress. Ken Billington’s lighting and Darron L. West’s sound seamlessly draw the audience into the world of the 1930’s.

Murder on the Orient Express is that perfect blend of incongruous-seeming elements — adventure, humor, mystery, and murder — that will make you very happy you decided to take this ride. Head to Princeton’s McCarter Theatre Center and get your tickets now! All aboard!

Murder on the Orient Express is presented by the McCarter Theatre Center at the Matthews Theatre on the campus of Princeton University through April 2nd. For tickets and information, visit www.mccarter.org.