While BIg Ang is the breakout star of “Mob Wives” it’s her larger than life personality and love for the gays that keeps us all loving “everything Ang.” She chattted with about this past season of “Mob Wives,”  her ever growing brood, and what she has coming up next.

(It should be noted that following our chat, Big Ang was diagnosed with a cancerous growth in her neck, which required surgery. The LGBT community wishes Big Ang a very speedy recovery)!

Thanks for taking the time to chat with me! Between a busy “Mob Wives” season and your various businesses, you seem to be constantly moving. How’s your family? 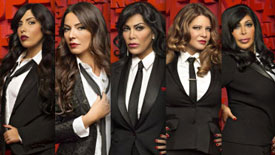 Everyone is wonderful! Growing and growing for sure. I just had another grandchild on Valentine’s Day, and now my son is having another one in three more weeks. I’ll have five grandchildren, I am an old lady!

Well “Mob Wives” was definitely crazy this season, and it was somewhat of a rough year for you.

Please, on the show, off the show, a rough year for sure.

What do you think made this season of the show so difficult for you? We definitely saw a different side of you.

You know what it is, people just say stupid things sometimes, They forget that they’re on national television!

You had a couple girls from Philly join you in the past couple years, with Alicia DiMichele and Natalie Guercio joining previously, and this past season, you had Natalie DiDonato joining the ladies. What do you think about the addition of the Philly girls?

No thank you. To tell you the truth, I really like Natalie Guercio, as for Natalie DiDonato, I don’t know where she landed from, but she’s the worst. They’re always picking on Natalie “G”, I’m sick of it. Let’s move onto the next chapter. I miss Alicia, she’s so pretty and just so wonderful. I was with her in Philly recently; I’m like the world traveler!

Do you think you’ll do another season of “Mob Wives”?

I really hope so!

You’ve spun your larger than life personality on the show onto two spin offs of your own, “Big Ang” and “Miami Monkey,”  and also have an amazing wine with your name on it, not to mention your now famous Staten Island watering hole “The Drunken Monkey!” How are all of your various business doing?

“The Monkey” has been very busy! The wine is going very nicely, thank God. I don’t think I’ll do another spin-off, unless it was Big Ang and all the babies. Five grandchildren in one year, who does that?! I took my granddaughter and my son to Florida; we drove there! That was an experience; next time I will fly for sure.

You came down to Paradise in Asbury Park last summer and there was a line to get to see you! What do you think it is about you that makes boys gravitate to you?

I love the gays! I was at Feathers in River Edge recently with King Ralphy and it was such a good time. I just love the boys and love that they love me!

What’s next for Big Ang?

Well for the next season of the show, I want to stop talking about Natalie maybe? That would be a start. I would like to maybe do a sitcom.

Maybe “Dancing with the Stars” or “Celebrity Apprentice?”

I wouldn’t do the dancing, I’m too old for that! I watched “Celebrity Apprentice” this season, they work hard. They seem to be there a long time, no thanks!

If you had to sum up your life and everything going on right now in one word, what would it be?