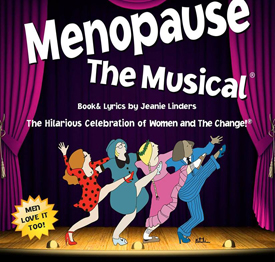 “Menopause the Musical” was in Trenton at the War Memorial Theater. The four very talented and accomplished women from the national touring company dazzled and delighted the small but vocally appreciative audience for 90 plus minutes with highly entertaining jokes, gags, and of course, music about – what else – Menopause.

As only women who have been through it or are going through it can know, “The Change” is a time in life that might best be described as bittersweet, often the former without the latter. But “Menopause the Musical” certainly sweetens the pot, if only for 90 minutes. Lampooning the night sweats, the hot flashes, the mood swings, the sleep deprivation, and our mothers, by reworking the lyrics of old songs from the ’50’s to the ’80’s, “Menopause the Musical” takes menopause to a new level that ends up celebrating women, the change, and growing old(er).

The four women of the cast–Sandra Benton as the Professional Woman, Beth Buczkowski as the Soap Star, Ingrid Cole as the Earth Mother, and Liz Hyde as the Iowa Housewife/Dance Captain, all played their parts admirably. Clearly, all are multi-talented and accomplished singers, dancers, and actors. Of particular note was Sandra Benton, who wowed the audience several times with her vocals. For one number, she came out dressed as Tina Turner, and must have been channeling her, for she WAS Tina Turner.

It was a grand show, a hoot of a good time. If you’re a middle aged or older woman – really, if you’re a human being with any kind of sense of humor – you will love this show. Unless you’re dead. Then, maybe not so much. At the end, the audience was invited to join the cast on stage in a kick dance to celebrate life. It really is a kick ass of a show.

Ingrid Cole wants everyone to know that “Menopause the Musical” is a play not just for women, but is a play for everyone. And she ought to know – she plays the role of Earth Mother in the show, and has played it for the past ten years.

Ingrid grew up singing in a church where her father was the director. She comes from a classical background, and fell in love with musical theater and has pursued it ever since. She attended the New World School of Arts in Miami, and is a proud card-carrying member of Actors Equity Association. Besides “Menopause”, she has played in numerous other shows including the mother in “Gypsy”, “Nunsense”, and cabarets throughout the nation. She is getting ready to do “Chicago” in Atlanta, where she lives, this October. That will be followed by the cabaret “Cole Things Cole” in November. She also still sings professionally in a church.

On a personal level, she has been involved with a woman for four years; they plan on marrying as soon as they figure out what state to marry in. (They live in Georgia.) They just decided to have her 19 year old daughter walk them down the aisle. When asked what she has learned from playing in “Menopause”, she said she has become an expert on menopause, something she knew nothing about when she first started playing the part. Instead of seeing menopause as negative, or hard to accept, she now sees it as something to embrace and celebrate. When you’re in a group of women, she says, your experience of menopause becomes magic and celebratory, as well as therapeutic, because you’re laughing from your gut.

Having just seen the show, I couldn’t agree more. The play is touring the country and more information is available at www.menopausethemusical.com.