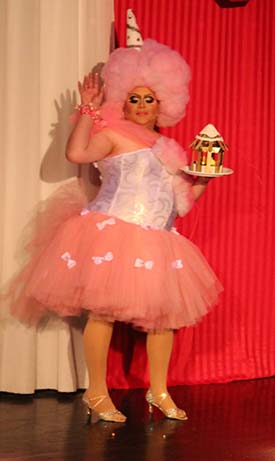 She has been dubbed the “Queen of Late Night,” and with three bestselling books, and a fourth released just weeks ago, powerhouse comedian Chelsea Handler is ready to take on the world. As part of the “I Am Equal” campaign, the New Jersey native has a lot to say when it comes to equality and her home state.

Why do you feel you connect so well, and in turn, have developed such a bond with the LGBT community?

I’ve written a book about how many one-night stands I’ve had, so I’m in no position to tell anyone else how to live their lives. I don’t care if someone is gay; in fact I encourage it. I also think most lesbians believe they have a shot with me.

Lately, it appears as though everyone is hopping on the “gay bandwagon” in hopes of growing or gaining a fan base. Working in Hollywood, what are your thoughts on such individuals?

As long as they’re coming from an honest place and not trying to act like someone they are not, then the more people that support others being who they are, the better.

Why do you feel people in today’s society, and especially within the entertainment industry, are so quick to “typecast” another?

I think people just feel more comfortable when they think they know who someone is. It makes them feel in charge.

What is your ultimate goal in life, and out of everything that you have accomplished in your life thus far, what are you most proud of?

I’m most proud of my first three books.  They are all mine; I didn’t have someone write them for me or with me. Having each become bestsellers is a feeling I can’t put into words. I guess I should learn to, since I’m supposed to be an author.

Nothing in life is easy. In your raw, honest way – what advice would you give to those individuals who are struggling with who they are because they allow broken individuals and “peer pressure” to control or persuade their decisions?

I can’t say enough to be proud of whom you are. As long as you remain true to yourself, nobody can take that away from you. People who judge, make fun of, or bully, are the ones who deep down aren’t comfortable with themselves, and they envy you for knowing who you are. I’ve been called lots of names; it keeps me motivated.

Do you feel as though people, at least subconsciously, feel they need to live up to stereotypes and expectations? If so, do you feel that this is a reason why many fail to succeed in their field(s) of interest?

Sure, I think some people do. It’s about knowing; going in how you want and how you want to be seen. When you let others tell you how to act, you get into trouble.

Growing up in the Garden State, what are some things that you love or hate about New Jersey? Also, if you had to create and design the “perfect” LGBT venue – what would it be?

As a whole, I love New Jersey. I hate how most of my city knows that my father slept with his cleaning lady, but that’s another story. I don’t have any design talents, but if someone would like to build a nice one, I’ll go drink there.

If you were President for a day – what would the U.S. look like? What would “Chelsea’s World” be like?

It would be a disaster. I have no interest in being the President, although I have thought about dabbling in Secretary of State. Secretaries usually get a lot of action.

What are some projects that you have in the works, and what can readers and fans expect from you within the next year?

My next book, “Lies that Chelsea Handler Told Me,” is now out. It’s written by my friends and family, stories about lies I’ve told them and pranks that I have pulled on them. I also added my take on their stories at the end of each chapter; since it’s mine I made sure to get the last word in. I like to lie, it brings me great joy – Now it’s bringing a little revenue to the people I love, so it’s a win-win.

She has been dubbed the “Queen of Late Night,” and with three bestselling books, and a fourth released just weeks ago, powerhouse comedian Chelsea Handler is ready to take on the world. As part of the “I Am Equal” campaign, the New Jersey native has a lot to say when it comes to equality and her home state.

Why do you feel you connect so well, and in turn, have developed such a bond with the LGBT community?