“Gloria: A Life” is everything a stage biography should be, and more

McCarter Theatre Center in Princeton opens its 2019-2020 season—the last one with Emily Mann as Artistic Director—with Gloria: A Life, written and directed by Ms. Mann. Starring two-time Academy Award nominee Mary McDonnell as Gloria Steinem, this is a powerful play—a well-written, well-directed, and brilliantly acted look at the history of the women’s rights movement as seen through the life of one of its major activist-leaders. 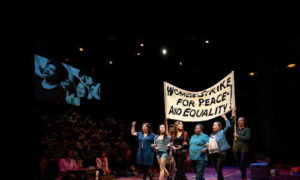 The first act of the play, running almost two hours without an intermission, is Gloria relating her own story. Going from her early days in New York as an aspiring journalist, Gloria: A Life chronicles major events and players in the women’s rights movement and Ms. Steinem’s part in it. It also gives some glimpses into Gloria’s relationship with her mother.

The stories of many women, not just the more visible players such as Flo Kennedy, Bella Abzug, and Wilma Mankiller but also bunnies in the New York Playboy Club and women sharing their stories about abortion, are all a part of the movement. The play firmly links sexism to racism, ageism, homophobia, and other forms of oppression, making it clear that the denial of rights to one group is the denial of rights to all.

In the second act of the play, which immediately follows the end of the first act without a break, actors and audiences become a “talking circle.” They are encouraged to share their own stories and express how Gloria: A Life has left an impression or revealed hitherto unknown information. At the end, the audience is encouraged to do one outrageous thing within 24 hours—and every day after that, creating a better world. The audience is also encouraged to talk among themselves and in their own circles of friends, family, co-workers, and others, because the information gained from shared stories is powerful and removes the feeling that one is alone in how they experience events in their lives.

Emily Mann has guided her actors through the life story of Gloria Steinem with warmth and sensitivity, creating a sense of the power of individuals united, committed to making change. Mary McDonnell’s Gloria is a force of nature as well as a woman embracing her emotional truth and the power that comes from self-acceptance and self-understanding. She is supported by an exceptional sextet of actresses playing multiple roles of both sexes. They are Gabrielle Beckford as, among others, Dorothy Pitman Hughes, Larry King, and Coretta Scott King; Mierka Girten as Saul Bellow, Gloria’s mother Ruth Nuneviller Steinem, and Bella Abzug; Patreena Murray as a Bunny Mother, Dr. John Sharpe, and Flo Kennedy; Erika Stone as Wilma Mankiller and Gay Talese; and Brenda Withers and Eunice Wong as reporters, editors, marchers, protesters, and women speaking the truth of their experiences.

Gloria: A Life succeeds both as a biography that does not become a mere recital of “and then I did” events and as an encapsulation of an era and a movement that continues today. While everyone knows of Gloria Steinem and many remember her activist accomplishments, few know well the details of her life and struggles. Gloria: A Life is a powerful look at recent history. It’s also a damn entertaining piece of theatre. I strongly encourage people of all ages and backgrounds to make the trip to the McCarter Theatre Center in Princeton to see Gloria: A Life!

Gloria: A Life is presented by the McCarter Theatre Center at the Berlind Theatre on the campus of Princeton University through October 6, 2019. For tickets and information, visit mccarter.org.

“Avenue Q” is still a nice place to visit

“Wine in the Wilderness” is a heady night in the theater

“Eden Prairie, 1971” explores a deep divide in the country