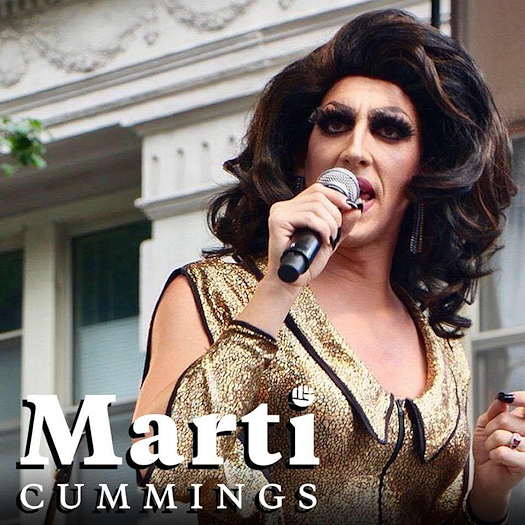 Marti Gould Cummings has always been interested in shaking up the system. From being one of the first to speak out against Chick-Fil-A, to turning the “Baby Shark” craze into a moment of activism—and a lesson in tolerance—Cummings is taking their message from the stage to the campaign trail, and is now officially running for City Council in the 7th District in the 2021 election. With a platform based on tolerance and speaking up for those who don’t have a voice, Cummings is the new kind of voice that is a true breath of fresh air in today’s ultra-dark political landscape.

I sat down with Marti to talk about entering the landmine-ridden political landscape of today, political heroes, and why every single one of us has the right to be political.

Michael Cook: Marti, you are one of the leading performers in New York City drag; what is it like to now be considered one of the true headliners in such a monumental city like New York City?

Marti Gould Cummings: It is overwhelming but in a good way! I am so grateful to be able to perform as a drag artist in New York City alongside so many other incredible talents!

You are taking your voice from the stage to the street with the ultimate goal of obtaining a seat on the City Council. First, take me back; when did you know you had political aspirations?

MGC: Like so many other people, there came a shift in political awareness when the last presidential election cycle began, with Trump announcing his campaign by using such hate to rile up a base of people who lead with bigotry. When that all started happening, it became very clear to me that drag has given me a platform, and it is my obligation to use it. Drag has always been political, with the first drag queen running for office in 1961. We must not only entertain people, but we must educate and empower them to do good and to vote out bigotry.

What will a City Council in New York with you on it look like? What are some of the top changes that are part of your platform that you would like to make happen in the city?

MGC: I am running in District 7 which encompasses much of the West Side of Manhattan Uptown. I want to work to protect tenants, to ensure people have a livable wage so that they can afford their rent and to ensure their landlords aren’t being corrupt and taking advantage of them. We must work to protect small businesses, especially in the age of online shopping. Let’s support local businesses and help people fulfill those dreams of being shop owners. I also want to help the high asthma and cancer rates in our district and work to get people the care they need.

Many people say that drag queens should be entertaining and not being political; what are your thoughts on that?

MGC: Like any entertainer, we are also people who vote. We have every right to be political, just like anyone else.

So many people struggle with finding their voice to speak out on issues that matter. How did you find your voice?

What would that Marti of today tell the Marti that was just starting her drag career? You have come so incredibly far in so many ways.

MGC: Don’t listen to the noise.

If you had five minutes with our current leader, what would you speak with him about?

MGC: I would speak to him about protecting transgender people and how the policies he has in place are putting lives at risk.