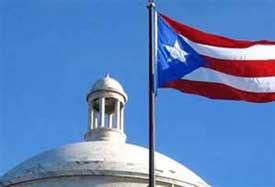 “Because no right to same-gender marriage emanates from the Constitution, the Commonwealth of Puerto Rico should not be compelled to recognize such unions,” Judge Perez-Gimenez wrote. “Instead, Puerto Rico, acting through its legislature, remains free to shape its own marriage policy. In a system of limited constitutional self-government such as ours, this is the prudent outcome. The people and their elected representatives should debate the wisdom of redefining marriage. Judges should not.”

Perez-Gimenez pointed to Baker v. Nelson, a 1972 case seeking marriage equality that the Supreme Court refused to hear for want of federal question, as precedent for upholding Puerto Rico’s marriage ban. The multitude of other judges who’ve struck down bans on same-sex marriage have pointed to more recent decisions, such as the ruling against the Defense of Marriage Act, as reason to believe
precedent has changed since that time.

But Perez-Gimenez wrote these decisions aren’t sufficient “to imply that Baker is no longer binding
authority.” Criticizing other courts that have struck down bans on same-sex marriage, Perez-Gimenez said marriage should be restricted to one man, one woman because that definition “is the fundamental unit of the political order.”

Lambda Legal has appealed the decision to the First Circuit Court of Appeals, in whose jurisdiction Puerto Rico lies. Although the appeals court hasn’t considered a marriage lawsuit since the Supreme Court’s decision against the Defense of Marriage Act last year, it determined that DOMA was unconstitutional based on a low standard of rational basis review.