After a much-publicized leak – draw your own conclusions – of the tracks from “Rebel Heart,”  Madonna has decided to release the first six songs, giving her most rabid fans something to chew on while they wait for the winter release of the full album.

The first official single is “Living For Love,” a gospel infused, throbbing dance track. The track is absolutely everything Madonna’s most rabid fans adore her for; great hooks and lyrics filled with tales of self-empowerment and triumph over adversity. While parts of those lyrics are definitely some of 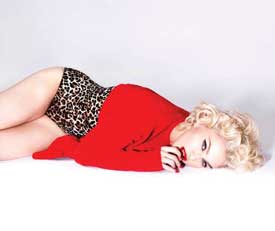 Madonna’s most introspective (“picked up my crown, put it back on my head”), the absence of a full chorus in the song prevents it from living up to the potential of what it could be. I predict remixers are going to grab this one and re-structure it, giving the “Living For Love” hook front and center attention.

Many were hoping that “Rebel Heart” would be a throwback to the “Music” era, heavy on acoustic instrumentals and a more “stripped down” Madonna. The track “Devil Pray” is the closest this set of tracks comes to that era. With an intro giving a nod to her guitar tinged hits “Don’t Tell Me” and “Miles Away”, this track is an ode to the pitfalls of a variety of mind-altering drugs, set to a hypnotic beat. Slightly overproduced, but since many have been asking for tracks of this stripped-down nature, it’s a step in a good direction.

“Ghosttown” is one of the best tracks heard on this album so far. Much like some of her best works; “This Used To Be My Playground,” “You Must Love Me” and “You’ll See,” Madonna excels with ballad-esque tracks with minimal electronic accompaniment. The Madonna on “Ghosttown” sounds much more mature and pure than one we’ve heard recently. This track is the most vulnerable we have seen Madonna lyrically in quite some time, and it will be interesting to hear who the inspiration is for this track.

“Unapologetic Bitch” is a much more R&B tinged track, and much like the attention grabbing title, it’s unnecessary. Lyrically, Madonna seems to be morphing and changing parts of her vocals to somewhat cater to a younger audience, which is also unnecessary. The track has a Caribbean-tinged feel, but the lyrics about “popping bottles” and “throwing parties” seem to be ideas that the less-evolved Madonna of the past may have entertained, and it comes across as somewhat inauthentic. Fans that adore the “bitch/say what I want” Madonna image will christen this song as their anthem (I can see the #unapalogeticbitch hashtags now) but many will find it to be a return to a Madonna we knew quite some time ago.

Giving a high electronica feel and some 80’s electronic guitar sounds, “Illuminati” is a mixed bag of sorts. On one hand, you have a somewhat dub-step esque beat, while you then have Madonna rapping (shades of “American Life”). Throw in a couple lyrically beautiful verses, and the track is definitely a departure from both the other tracks on “Rebel Heart” that I’ve heard. While Madonna’s attempts at newer sounds are legendarily risky (with various amounts of success) “Illuminati” seems like too much of a risk for one track.

The final track that we’ve been teased with is “Bitch I’m Madonna’ which has a guest starring appearance by rapper du jour Nicki Minaj.  This is definitely Madonna’s version of a “club-banger”, and she certainly does attempt to stay on trend, complete with somewhat of a dub-step structure. The lyrics are perfect for a night of partying, and remixes, for this one will no doubt restructure some of the weaker spots, highlighting the dance-ability portions. Getting past the stereotype of “rappers” Minaj’s lyrics are brilliantly written, but her place on the track seems, well,outof place. A track with the title “Bitch I’m Madonna” could have been much better served with lyrics referencing some of her most legendary tracks, with a guest star spot by someone like Lady Gaga or Katy Perry, both of which have worked with Madonna to varying degrees, but never in the recording studio (that we know of).

“Rebel Heart” has been teased in the media, specifically Instagram, for the past six months. What we’ve received from Madonna so far is both a nod to her past and a slight peek into what we could see in future incarnations. While many fans live for the new Madonna and the interesting directions she goes in, many of her most loyal fans are still waiting for a return to the most classic Madonna; thus far on “Rebel Heart” on these six tracks I’ve seen both; it will be interesting to hear the finished product.

Music to vibe through the Holidays