Actor talks new film’s ‘love is love’ theme, his real-life gay inspiration and why he hasn’t stopped thinking about Six Feet Under

As Giles, Richard Jenkins exudes a great deal of warmth playing a closeted ’1960s-era gay man longing for a romantic connection in Guillermo del Toro’s timely cautionary tale The Shape of Water. But cordiality comes natural to the Six Feet Under alum, who unforgettably portrayed the Fishers’ apparitional patriarch, Nathaniel, on HBO’s life-affirming dramedy about death from 2001-2005.

In conversation, Jenkins, 70, expresses genuine gratitude and curiosity about my deeply felt connection to another brilliant turn of his — this time in del Toro’s enchanting, illusion-shattering tale of queerness, a story that gripped the Emmy-winning actor for that very detail.

In this awards-worthy spectacle, a mute janitor named Elisa (Sally Hawkins) and an imperiled merman (Doug Jones) fall hard for each other in a world where existing in the human form, especially if you’re black or gay as the socially aware allegory acknowledges, is already a heavy burden. Though the director’s whimsical yarn is set during the Cold War, its political commentary on queer and minority acceptance is a response to present-day disunity and the toxicity of white, male rulers.

“If you could title it Love Is Love, that’s what it is,” proclaims Jenkins, who discussed the film’s ability to break down walls that currently divide our nation, as well as the “invisible” gay actor he referenced while playing Giles and still, like the gay fans who continue to express their appreciation for the preeminent HBO show when they meet him, frequently contemplating the meaning of Six Feet Under.

Was part of the appeal of Shape of Water the “love is love” element?

RJ: Yes, absolutely — absolutely! These are invisible people who at that time, 1962, lived in the shadows, lived in their own world, a lonely world. And yeah, it was fascinating because I grew up in 1962. I was in high school. It was great for me. But there was nobody gay in my high school until our 35th reunion.

Right. Nobody could be out at that time, …right?

RJ: Nobody was out. Nobody! You didn’t talk about it. It wasn’t even on the radar. And so if you were a straight white guy, life was great. But if you were anything else, it wasn’t so good. 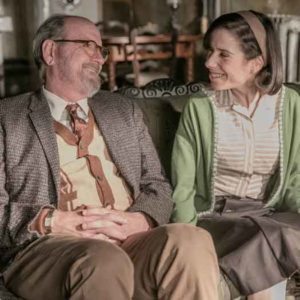 RJ: Absolutely. And, well, that’s why (Guillermo) wrote it, for today.

I understand Guillermo writes a biography for all of his actors and puts a secret in the biography that you are not to reveal to the rest of the cast. What was your secret for Giles?

Ha! You didn’t read the bio, did you?

RJ: I did read the bio! But I don’t remember what the secret was. (Laughs)

He did say you didn’t use anything from the bio for the role.

RJ: Well, here’s my take on it: If it’s not on the page, then it doesn’t matter. The life of this character is on the page, that’s where all of the clues are. If you were writing a novel and you had the back-story, that’s one thing; but it can be confusing to add something that nobody knows (about), so I just scour the script. That’s where I look for all of the clues to his life: who he is, what he likes, what he’s been. I mean, I read in the script that he and his boss at the ad agency were partners, and (Giles) would say, “I want to come back.” Now, does he mean to the agency? That’s not what it meant to me.

So you read their relationship as being romantic?

RJ: Yes, yes. And it wasn’t explained, but I got it from the script.

To play Giles, did you reference any real-life LGBT people who were also living closeted lives during the ’60s?

What did you love most about the dynamic between Elisa, who is literally voiceless, and Giles, who is, in a sense, also voiceless as a closeted gay man?

RJ: I loved every second of it. Guillermo said to me, “I couldn’t do this film with anybody else, and wouldn’t do it with anybody else but Sally.” We rehearsed for two weeks and we used the time to become friends. It took about 10 minutes to become her friend. We have a lot of mutual friends, and I just loved her immediately and we just became really good friends, and it shows onscreen. I mean, I think that’s there, and it was important that we and Guillermo did hang out together. So, it was very free on the screen with her, and it was very relaxed. And you can’t hide that. You can’t fake that. That’s what you try to do as an actor — live your life as it’s happening. And it’s hard when you don’t have somebody who you trust or love, and I do both of those with her.

One of the real turning points hinges on Giles and his interaction with that diner server. Could you talk about Giles’ motivation after that scene and how he ends up being instrumental in helping Elisa fulfill her wish of being with the merman?

RJ: It starts with the realization after the diner and after being turned down by his boss, which again, I played as they were together at one time, like, “I bet these two had a relationship.” So after both of those things fall off, I say to her, “You’re my only friend and I don’t even know what this thing is, but it’s important to you, so I’ll do whatever you want.” I love the fact that he gets there from living these pipe dreams, that somehow this boy in the pie shop is gonna be interested in him (laughs). But we’ve all had that! I thought Hayley Mills, if she ever met me, would fall for me! (Laughs) I don’t know what it is — you just live in this… it’s just odd. But I love the fact that he goes from thinking of it as a fish in a tank to her fiancé, basically. And he says to her, “ He’s an interesting guy.”

You also memorably played a gay character, Josh Brolin’s life partner, in 1996s Flirting with Disaster. How do you reflect on that role?

RJ: I love that role! (Laughs) Oh my gosh — and he carried his gun everywhere he went! I loved it. I just loved the whole project. I just loved playing him, this guy who happened to be gay. And, I mean, he seemed conservative in some ways.

RJ: He just wasn’t into it!

Was that your first gay role?

How aware have you become of your gay following?

RJ: Do I have a gay following?

You will after this movie, if you didn’t already.

Six Feet Under has an immense legacy in the LGBT community because it was so groundbreaking in that it featured realistic portrayals of LGBT people, including your son David, played by Michael C. Hall. That show has stuck with me in ways that I never thought a TV show could. Does it still sit with you? Do you think about that show every now and again?

I mean, that series finale. Those last 10 minutes.

RJ: The last 10 minutes were amazing, but what makes me sad is that — you never knew who my character was, because you only saw me when somebody thought of me. It was their recollection, their image, and their impression of me that you saw. There was so much that wasn’t said between the children and Nathaniel, both of the sons. I mean, David had no idea that I was proud of him, and then somebody said once that your father was proud of you and he said, “My father was proud of me?” They never talked about anything. Same with (my other son) Nate. And it just… it made me sad. I remember thinking, “God, I hope my kids and I don’t do this.”

There is an important lesson to be learned there: Say what you need to say now. There is… And I’ll tell people if they’re not getting along with their parents, ‘Just stop.’ You don’t want them to die with things unspoken. You just don’t. But, you know, (creator) Alan Ball — this is what interested him, that kind of true relationship with his children and family and each other. And it’s a very personal show, and it was an honor to be a part of it.

Do you hear from gay fans that have a deep connection to the show?

RJ: I do. I hear from people who say, “I’m gay and that show was just so important to me.”

That show went deeper for people than most shows. How do you as an actor process being a part of something that can emotionally resonate with someone as strongly as  Six Feet Under did?

RJ: I think it’s why we do it. It’s why I became an actor. I can’t paint, I can’t dance, I don’t sing, and so I became an actor. That’s my art, whether I’m any good at it, or not. It’s an interpretive art, but it is an art, I think. And you believe when you do it that there’s a common understanding between all people, whether they’re conservative or liberal or French or German, and that human connection is your job to try to make. When you do it’s incredibly gratifying because that’s why you’re there.

So something like Six Feet Under  — it’s funny with TV because in the theater you know immediately, but in television and movies you don’t until people stop you at an airport or on the street or write something about it, so it’s incredibly gratifying because it’s why we do what we do. We all are alike in so many ways that we try to fight constantly. We just try to fight it — ‘I’m not like this; I’m this, I’m this’ and (sighs)… that’s why art can break that down. If you go see a movie like this and you’re a conservative who is against gay marriage, and you like this movie, that is in your subconscious from now on. You’ve actually walked in somebody else’s shoes.

While I watched the film, the word “empathy” kept coming to mind.

RJ: Empathy — you are absolutely right. (Guillermo) wrote it for this time. ‘It’s an adult fairy tale,’ he said, ‘that I wrote for this time.’ While we were shooting it, Guillermo would say, ‘You think it’s working?’ I’d say, I have no idea! (Laughs) He said, ‘By the time they get to the dance number in black and white, they’re either gonna laugh me out of the theater or they’re gonna understand.’ And I said, That’s why it’s art, man. Because you’re taking a chance. And they do understand.

I don’t usually think about movies this way, and usually if somebody doesn’t like a movie that I’m in, I think, Well, OK, maybe it’s me. But if you don’t like this movie, there’s part of me that thinks it’s your problem, it’s not my problem (laughs), because it is a beautiful, beautiful film.

As editor of Q Syndicate, the international LGBT wire service, Chris Azzopardi has interviewed a multitude of superstars. Reach him at chris-azzopardi.com and on Twitter (@chrisazzopardi).

“The Lost City” of the D