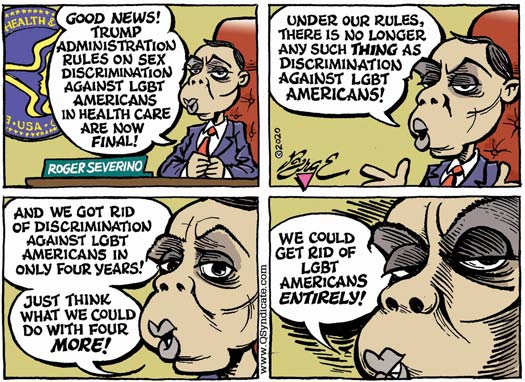 Going into the 2016 election, Donald Trump dubiously touted himself as a friend to the LGBTQ community. From the moment he took the oath of the office of President of the United States, he has been anything but—especially to the transgender part of the acronym.

Since January of 2017, there have been at least 72 instances where either Trump himself or officials with his administration have taken action that directly impacted and hindered the rights of the LGBTQ community. The transgender community has been the biggest of the targets. Trump has attempted to keep Trans service members from serving in the Armed Forces and to repeal a Trans person’s rights to healthcare and equal treatment when seeking healthcare, housing, or even access to public restrooms. Trump has used his hate-filled rhetoric to his advantage. He has stoked his rabid fan base to further alienate and ostracize a vulnerable part of the population.

“Most of the attacks that he’s done against us have been just to get his base going and play his identity politics cards,” Ethan Dayback of Monmouth County said. “It’s not socially acceptable to attack gay people for the right wing agenda anymore so we are the next in line.”

Most of these victims were killed by acquaintances, partners or strangers. Largely the perpetrators of these attacks go free, say activists. The disclosure that someone is Trans isn’t always the cause of these attacks. Many times a person’s Trans or gender non-conforming status leads to unemployment, poverty, homelessness, and/or survival sex work that can put them in harm’s way. Protections put in place, most notably by the administration of Barack Obama, to ensure equal rights for Trans and gender non-conforming people have been stripped away by Trump and his cronies at the federal level.

As recently as July, the Department of Housing and Urban Development announced the rollback of a rule that had protected transgender people from discrimination by homeless shelters and other housing services receiving federal money. A month prior, the Department of Health and Human Services finalized rollbacks of health care discrimination rules, which effectively eliminated protections for transgender people that experience discrimination in health care and/or insurance companies denying transition-related care. In May, the Department of Education declared that the federal Title IX rule requires that schools ban transgender students from competing in school sports. The Trump administration threatened to withhold funds if they didn’t comply. All three departments are stacked with Trump cronies, particularly HUD (Ben Carson) and Education (Betsy DeVos).

In response, Lambda Legal filed a lawsuit against the Department of Health and Human Services in late June after the department pushed through a rule that effectively allowed discrimination based on religious bias against LGBTQ patients.

“While HHS’s health care discrimination rule cannot change the law, it creates chaos and confusion where there was once clarity about the right of everyone in our communities, and specifically transgender people, to receive health care free of discrimination,” said Omar Gonzalez-Pagan, Senior Attorney and Health Care Strategist for Lambda Legal, in a statement. “(Today), Lambda Legal, a broad coalition of LGBTQ groups, and the people our clients serve say ‘enough’ to the incessant attacks from the very agency charged with protecting their health and well-being. For years, the Trump administration has utilized HHS as a weapon to target and hurt vulnerable communities who already experience alarming rates of discrimination when seeking care, even now, during a global pandemic. Their actions are wrong, callous, immoral, and legally indefensible. We will fight back.”

“If he doesn’t lose this election I think the next four years are going to be really, really bad.”

“I think that in the last few months it’s really lived up to its expectations,” Dayback said of the dread the LGBTQ community felt ahead of the 2016 election. “Some of my friends and I were chatting recently about how up until a few months ago we thought that we were going to make it out of this presidency a lot better than we thought and that there wasn’t anything that was really irreversibly done. But over the last few months a lot of us kind of realized that the things that we were afraid of are starting to manifest now. If he doesn’t lose this election I think the next four years are going to be really, really bad.”

New Jersey has been one of the more progressive states in offering transgender and gender non-conforming rights and protections. Earlier this year, the Garden State became the ninth state in the nation to outlaw the ‘gay/Trans panic’ defense. The defense, which the killers of Matthew Shepard tried to use, puts the blame on the victim for their violent death. While this is good news for residents of New Jersey, there are still 41 states that allow this defense. There is no federal mandate in place against it.

New Jersey also allows changes to the gender marker on a birth certificate without having to submit any medical documentation. The New Jersey Law Against Discrimination protects transgender students throughout the state, with the law stating that you cannot be discriminated against on the basis of gender identity or gender expression. It also protects access to public accommodation, requiring that transgender students be permitted access to facilities such as locker rooms and bathrooms.

Previously, the Obama administration had issued guidance to public schools clarifying that Title IX, a federal law banning sex discrimination in education and associated activities, protected transgender and gender non-conforming students. It was not a new law. It clarified how federal law already protected students against discrimination, bullying, and harassment while at school.

In February of 2017, the Trump Departments of Justice and Education withdrew that guidance. While it didn’t change federal law, it caused confusion. It sent a message that it was okay to discriminate against transgender students.

With the election approaching, the push to register voters has hit a fever pitch, especially with so many marginalized communities standing to lose so much if Trump wins another term. Vote!