June is Pride Month for LGBT communities across the country — and parades abound. While we all rev up each June for pride so, too, do the fault lines of race and class in our larger white LGBT community. 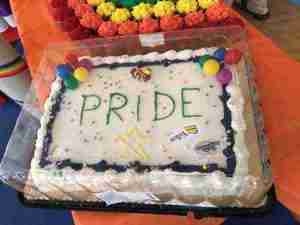 With advances such as hate crime laws, legalization of same-sex marriage across the country, and homophobia viewed as a national concern, the LGBT movement has come a long way since the first pride march in 1969. Many discuss the distance the LGBT community has traveled in such a short time. From a disenfranchised group on the fringe of America’s mainstream to a community that is now embraced.

But not all members of our community have crossed the finish line. Some are waving the cautionary finger that within our community not all are equal. And pride events can be public displays of those disparities.

Cultural acceptance was just one of a few things LGBTs of color did not experience from larger pride events. As a predominately white event, many LGBT of color revelers experienced social exclusion and invisibility. And, after decades of pride events where many LGBT people of color tried to be included and weren’t, Black, Asian and Latino pride events were born.

In December 2014, The New York Times front-page article on HIV/AIDS was both shocking and unsparing stating, “The AIDS epidemic in America is rapidly becoming concentrated among poor, young black and Hispanic men who have sex with men.”

The news that is often not reported, or stays under the radar, is the proactive steps this demographic group is taking to stem its spread — not only among themselves, but among the entire community. One of the reasons for not knowing what these men are doing to stem the epidemic is because their ways of reaching out to their brothers, and sisters are both culturally creative and unconventional.

For example, in 2015 the Hispanic Black Gay Coalition in Boston kick-off event was the health expo Our Health Matters, Too! The expo was held at the gymnasium of the Epiphany School in Dorchester that was filled with health booths, workshops, exhibits and screenings. There were workshops on sex positivity, prostate health, trans health, domestic violence, and LGBT depression, to name just a few. And there were screenings for the following: STDs, vision, hypertension, and HIV/AIDS. And the community came out.

It might seem odd that LGBT people of color would prefer going to a school gym or a pride picnic for health check-ups and information than go to a hospital, the reasons are unfortunately rooted in the systemic health care disparities due to race discrimination, gender identity and sexual orientation.

Massachusetts is known as queer-friendly and for its outstanding hospitals. People travel from other states and countries to be cared for. But adequate, culturally competent, and compassion healthcare for its LGBT population is still gravely lacking, especially when it comes to communities of color.

Unlike the revolutionary decade of the 1960s during which the air bred dissent, our LGBT agenda has moved from our once-urgent state of, “Why we can’t wait!” to our present lull state of, “Where do we go from here?”

Where we go from here, now, in my opinion, is in recognizing the need to network and build coalitions beyond one’s immediate communities. Thus, creating an intersectional social justice activism throughout our Commonwealth and country to foster healthy and wholesome communities.

While pride events are still fraught with divisions, at their core, pride events are an invitation for community to connect its political activism with its celebratory acts of song and dance in its continued fight for justice. They should highlight the multicultural aspect of joy and celebration that symbolizes not only our uniqueness as individuals and communities, but also affirms our varied expressions of LGBT life in America.

But, as long as LGBT communities of color continue to be absent each June, pride month is an event to not be proud of.

Rev. Irene Monroe can be reached at irenemonroe.com.

Archbishop Carl Bean’s “I Was Born This Way”