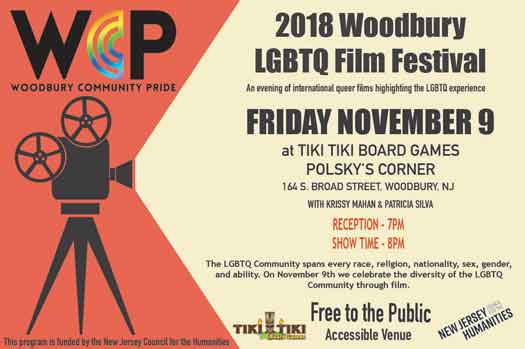 The Woodbury Community Pride group will sponsor the first LGBT Film Festival in this southern New Jersey town. The festival will start at 7 pm at Polkys Corner, 164 South Broad Street in Woodbury, NJ. “The LGBT Community spans every race, creed, sex, gender, ability, and nationality,” say organizers. “Come out to discover the diversity of LGBT people through film.”

Woodbury Community Pride recently received an incubation grant from the New Jersey Council for the Humanities to bring the festival to town. The film festival is a collaborative event between WCP and Feminist Film Workshops. It features a number of international LGBT films highlighting the cultural diversity of the LGBT community.

The inaugural Woodbury LGBTQ Film Festival is programmed by filmmakers Krissy Mahan and Patricia Silva. Mahan is a South Jersey native; and Silva is a former Philadelphia resident. Together they produce film workshops and develop educational programs.

Woodbury Community Pride President Tony Doran said, “We really want Woodbury to be a destination for the LGBTQ community, and this film festival is just another way we are doing that.”

Krissy Mahan and Patricia Silva from Feminist Film Workshops are filmmakers and curators whose work has been featured at numerous festivals around the world. Both filmmakers have screened their individual works at Anthology Film Archives, USA (2017, 2018); British Film Institute, England; Cervantes Institute, Brasil and India; and at Center of Contemporary Art Glasgow for SQIFF (2017, 2018); and have screened, and been panelists, at New York City Feminist Film Week (2017, 2018).

The event will be held in the recently renovated Polsky’s Corner located at 164 S. Broad Street, Woodbury, NJ. Ryan Morrison, owner of Tiki Tiki Board Games at Polsky’s Corner said, “I’m happy to be part of the positive things going on in Woodbury.” Morrison is also a recipient of a 2018 WCP Rainbow Award for his outstanding support.

There a many films slated for showing on Friday evening among them are:

Bear in a Bedroom – As a bear dresses, he reveals more than just a hairy chest. He talks about the highs and lows of his life – and the healing power of love.

After the Date – After the date shares the relationship between Emma, a trans woman, and a new romantic interest, Nate. The two are brought together by Emma’s interest in photography. Emma fears rejection from her new boyfriend, and the strength of their bond is tested after Emma experiences harassment by a police officer. After the Date depicts a positive and loving relationship between a transgender woman and a cisgender straight man.

More than GOD – A short comedy set in modern Ireland that follows the attempts of a religious doctor to uncover his wife’s suspected affair, but instead is confronted by the rigidity of his religion, the boundaries of his love for his daughter, and his obligation to resuscitate her lover’s husband.

The Devil is in the Details – Set in mid-19th-century France, this short follows Alexina, a trainee school teacher in a young girl’s convent, who suffers unbearable pains. After examination by a doctor who questions Alexina’s gender and subsequently decides that masculinity prevails, Alexina works to find their own path forward.

Mark Bunyun: Very Nearly Almost Famous – In the words of a fan, he was “The first gay superstar” but was he too gay for his own good? Co-founder of the Pink Singers and a driving force behind Gay’s The Word bookshop, Mark Bunyan has been engaged in almost every pivotal event in UK gay history including fundraising for the defense of the famous blasphemy case Whitehouse v. Lemon involving Gay News and a high court battle to prevent the religious funeral of a loved one.