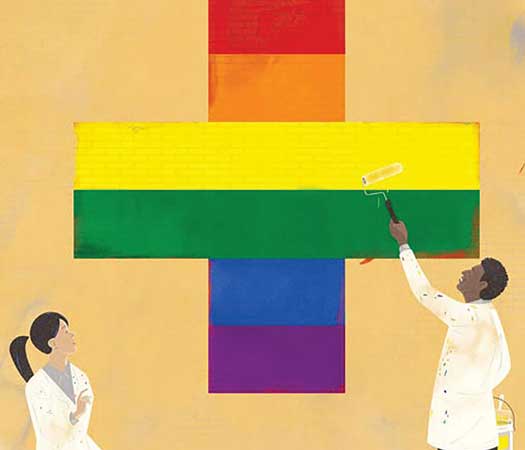 Lambda Legal and Steptoe & Johnson LLP filed a lawsuit challenging the U.S. Department of Health and Human Services. A recently published health care discrimination rule seeks to carve out LGBTQ people and other vulnerable populations from the protections of Section 1557 of the Affordable Care Act (ACA) said Lambda legal. The ACA prohibits discrimination on the basis of sex, among other bases.

“The Trump Administration’s final rule would have you think that decades of healthcare bias against LGBTQ people never happened. But not so.”

“Today, Lambda Legal, a broad coalition of LGBTQ groups, and the people our clients serve say ‘enough’ to the incessant attacks from the very agency charged with protecting their health and well-being,” said a press reelease. The comments were extensive in addressing the attacks on LGBTQ poeople.

“The Trump Administration’s final rule would have you think that decades of healthcare bias against LGBTQ people never happened. But not so,” said Adrian Shanker, Executive Director of the Lehigh Valley Bradbury-Sullivan LGBT Community Center in Allentown. “Healthcare non-discrimination protections are essential to ensure that LGBTQ people can receive the healthcare we need to survive. That’s why Bradbury-Sullivan LGBT Community Center is standing up to the Trump administration on behalf of our community. Healthcare is a human right and LGBTQ people deserve non-discriminatory healthcare.”

“While HHS’s health care discrimination rule cannot change the law, it creates chaos and confusion where there was once clarity about the right of everyone in our communities, and specifically transgender people, to receive health care free of discrimination,” said Omar Gonzalez-Pagan, Senior Attorney and Health Care Strategist for Lambda Legal. “For years, the Trump administration has utilized HHS as a weapon to target and hurt vulnerable communities who already experience alarming rates of discrimination when seeking care, even now, during a global pandemic. Their actions are wrong, callous, immoral and legally indefensible. We will fight back.”

“This rule is antithetical to Whitman-Walker’s core values,” said Naseema Shafi, CEO of Whitman-Walker Health. “Health care systems should be safe places for everyone to seek care; where people’s identities are affirmed, regardless of race, religion, sexual orientation, gender identity, disability, national origin, or other characteristics. The federal government should be a partner in addressing the repeated violence perpetrated against Black and brown communities, against immigrants, and against transgender people, and today’s action is about holding the administration accountable for the safety, well-being and civil rights of our communities.”

“The health care discrimination rule will hurt marginalized communities who already experience barriers to care, but especially those of us who are transgender, non-English speakers, immigrants, people of color and people living with disabilities, and will have an even more serious impact on those of us who hold intersectional identities,” said Bamby Salcedo, President and CEO of the TransLatin@ Coalition. “The TransLatin@ Coalition and its affiliated organizations such as Arianna’s Center in Florida and Puerto Rico and the Fundación Latinoamericana de Acción Social (FLAS) in Texas exist because of the already present challenges in our communities and because everyone deserves easy access to care that is respectful of who we are, compassionate and competent. Our lives depend on it and we’re going to fight for it.”

In 2016, the Obama administration finalized a rule implementing the nondiscrimination provisions of the Affordable Care Act. Known as Section 1557—it prohibits discrimination based on gender identity, transgender status, or sex stereotypes as forms of sex discrimination. In May 2019 the Trump administration announced a proposed rule change to roll back these protections.

Since 2019, federal courts—including most recently, the U.S. Supreme Court—have interpreted sex discrimination protections to protect LGBTQ people. The proposed rule would carve-out LGBTQ people from the Affordable Care Act’s nondiscrimination protections, and invite health care workers, doctors, hospitals and health insurance companies that receive federal funding to refuse to provide or cover health care services critical to the health and wellbeing of LGBTQ people, such as gender-affirming and reproductive care. The proposed rule would also limit the remedies available to people who face health disparities, limit the access to health care for people with Limited English Proficiency, and dramatically reduce the number of health care entities and insurance subject to the rule.

On Friday, June 19, 2020, HHS published the health care discrimination rule, which is scheduled to go into effect August 18, 2020.

Lambda Legal’s docket has multiple examples of LGBTQ people confronting discrimination and bias in accessing health care. They include a lesbian couple denied infertility treatment at a women’s health clinic, a transgender man whose hospital refused to allow his surgeon to perform a routine hysterectomy, and transgender people denied coverage for gender-affirming care. Lambda Legal documented hundreds of other instances of discrimination. They included a proposed rule to expand health workers’ and institutions’ ability to elevate their own religious interests over the needs of their patients.

Living Trans in the time of Trump