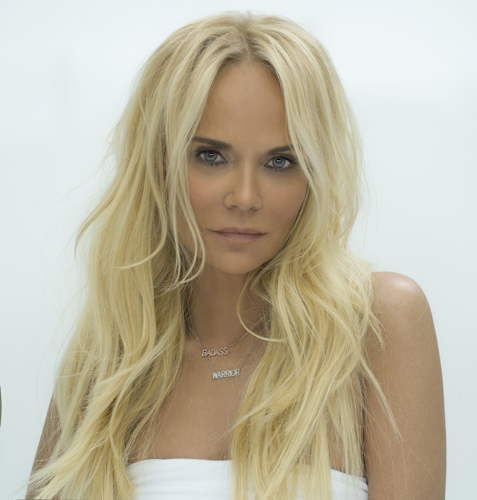 Whether it’s being the most glorious Good Witch around in Wicked or taking it to church on the sorely missed GCB (Good Christian Belles) Kristin Chenoweth has always been all about the girl power. It should come as no surprise that she’s now crafted an entire album around some of her favorite glorious ladies. For The Girls features some of the most popular songs sung by some of the biggest female artists in music today. As an added bonus, Chenoweth got the privilege of being able to duet on some of the tracks, several of which are with some of her true heroes.

I got to sit down with this multiple award-winning performer about what her brand new album, her ultra-busy upcoming holiday season, a passion project she is bringing to the stage, and what it was like signing with one of her childhood idols.

What made you want to recreate such iconic songs on For The Girls? Not just on the recordings that you did solo on the album, but recreating these songs with some of the biggest female names in music today?

Kristin Chenoweth: I wanted to ride a lot of lanes. I have been working on the record a year and a half, and I did not set out to say “it has to be female.” I just wrote down songs that I liked and that I wanted to sing, especially songs that people would not expect from me! I wrote the list and was like “Holy crap this is a lot of singer-songwriters, female power right here!” I guess it’s gonna be called For the Women and then I changed it to For The Girls. It’s really for the girls, by the girls, to the girls, but also for the men that love us, you know? I just had to do it.

Some of the songs you chose for the album are so identified with other artists. Was that intimidating?

KC: I knew that there were going to be some songs that were gonna be scary for me, like “Desperado.” I fully orchestrated that one, with a full orchestra. I was scared to touch “The Way We Were” but I was like, “no, put your stamp on it Kristin.” The same thing [happened[ with “The Man That Got Away.” I asked Alan Broadbent to make it jazzy, make my version of “The Man That Got Away” a homage to Judy Garland. I am proud of that track since I love her so damn much.

Hearing you sing “I Will Always Love You” with Dolly Parton is absolutely breathtaking. How did that magical pairing happen?

KC: Thank you so much. You know how I feel about Dolly. I reached out and asked if she would sing on my record. And I asked her if she would do “Here You Come Again.” She said “I want to sing a song that I wrote with you.” Never did I ever think she would give us “I Will Always Love You.” I was so happy, I cried. I wanted to not give the song away, and the introduction is a little Bonnie Raitt’s sound with instruments. When I came in, this is a song I’ve been singing since I was a little kid. I know it sounds like Dolly, but what the heck, I’m singing with the queen! She heard my version, she sent me back her version, she said: “I really like that one lick you’re doing, real low, that one lick.” I could tell that she was a little inspired, and then I decided to really speak the part and thank her for inspiring us all and wishing her love and her happiness. They’re her words not mine, but that’s the way that I feel about her. When she sent it back to me and did that background singing while I did that wail, she out-sang herself I think. I just lost it, I can retire now; now it’s done. It was awesome.

I remember you appearing on Watch What Happens Live and you told (host) Andy Cohen that the two singers you would love to sing with the most would be Reba McEntire and Dolly Parton. It’s almost like you have talked this one into existence.

KC: Yes! When you put things into the universe… I went to Reba first, she is from Oklahoma, and she is my queen too. That is a Broadway actress, she is a funny actress, she does a lot of lanes, and I love her, I worship her. Then I started to think about what song I would do. I did not want to do “I’m A Woman.” I was scared of it. I’m not Aretha, I never claimed to be Aretha. Then I started to think about who did it originally, and it was Peggy Lee. Now you’re speaking my language. I went back to the original source. And Peggy Lee I got. I thought, why I don’t have Jennifer Hudson, who has the best voice on the planet sing it how a lot of people want to hear it. Then I’ll do the original source sound-ish, which will be my homage to Peggy, and then Reba does Reba, and then let three people hear three different worlds come together. I am very very proud of that track too, I have to tell you.

Your last couple albums have been recreations of music that is already so iconic, but you have put your own unique and amazing stamp on it. Is there a genre of music that you have not gotten to tackle yet that you really are anxious to do?

KC: Yeah! First of all, this one was pretty damn scary because I was doing covers. There are some people that will say that they don’t want to hear my version of “Crazy,” “I want to hear Patsy Cline.” I get that, I totally do. I hope people walk away like with Eva Cassidy, and say “wait, I don’t know who that is anymore.” It doesn’t matter anymore. I hope they understand that “The Man That Got Way” won the Academy Award, and then came Barbra Streisand, and then came Lady Gaga. What I haven’t tackled yet, and it’s coming, it is coming. I’m scared of it, it’s probably half done, and it does go with a story, a life story of mine. I am scared, but I am doing it, and that will be the next thing.

From what we are seeing, this Christmas you will be all over our televisions! For starters, you did a concert with the Mormon Tabernacle Choir for their annual Christmas show, which seems like a massive undertaking.

KC: Good luck getting rid of my face this season (laughs)! Oh my gosh, the Mormon Tabernacle Choir concert, yes! As far as how many in the chorus, how much orchestra, and how many people; with an unobstructed view! That place, there are no beams or poles. Everybody, no matter where you sit, will see [it] perfectly. I got a little bit of hate for it, but when you show up with your Pride shirt on with the Tabernacle choir, or you do press with your rainbow pin, that will happen.

I told them, “you guys need to know my beliefs if you hire me.” I have to tell you something; never did I feel so respected. I will say, the Mormons and Christians, a lot of our sons and daughters are taking their lives because they don’t feel welcome in the church. The Mormon leader who is making strides in a different direction passed a revelation that all of their gay sons and daughters are welcome, and should feel welcome to come back to church. That may seem to some like “oh well, thanks a lot,” but to me, I’ll take the baby steps. Matt Easton, the valedictorian at BYU came out because of that. Now he knows he can go to church with his family….. It makes me very proud. So I’ll take the heat. I can’t wait for people to watch it.

There’s a song that I sing called “Angels Among Us” and I did a video for it, in conjunction and to help with the Mormon Tabernacle Choir and the awesome people that run it. I said, “I want to show Broadway Cares/Equity Fights AIDS, I need you to see my world.” We got it in there; there’s me and Sean Hayes all over the place. I adore him! I feel like we had a step, you now?

I can’t wait for people to see the Hallmark movie A Christmas Love Story either. The subject matter is a secret, and it is something that is very close to me. I was sort of behind the idea of it. I wrote the title song of the movie with my buddy Chely Wright. She is like my sister. Hallmark loved it and they made it their Hallmark Hall of Fame movie for Christmas, which is a lovely thing that they did that.

In the Netflix movie Holidate, I play a very naughty Aunt Susan; in each movie, it is two very different roles, so some of my family won’t be watching that one (laughs). It’s fun, Emma Roberts is the star and she’s wonderful. I play her crazy aunt. I met and fell in love with Jessica Capshaw, we just became BFFs. I am just really proud of both films for different reasons.

Your co-star Scott Wolf is in A Christmas Love Story, not too shabby!

KC: Okay, can I just tell you? I love his wife and she loves me, but when I look into his blue eyes, I go swimming and I can’t get out. It’s over. I love him, he’s perfect.

You have spoken about bringing the story of Tammy Faye Bakker to Broadway. Where are you with bringing that to life? Much like you, the LGBTQ community gravitated to her, partially because the love she gave to the community was so reciprocal.

KC: Robert Horn just signed on to do the script, and I am so excited. And I am ready for it! I do feel that love also; love begets love really. Maybe it’s the journey; I have graduated from not getting too upset about silliness, and I move through it quicker. I just want to put good things into the world and receive good things, that’s all it is.

So we all know you are a massive fan of all things Bravo. Let’s have a quick State of the Real Housewives recap.

KC: Yes! Okay, first of all, I am addicted to The Real Housewives of Potomac. Their breakout season for sure. I don’t know what is going on with Candicace, but I loved her in the beginning, and I’m like stop it! I am feeling bad for Ashley, with rumors, and how it can be. I love Gizelle, I did Watch What Happens Live with her once and she is gorgeous and beautiful.

You walked off the stage of the Broadway smash Wicked many years ago and an entirely new era of your career opened up. What would the Kristin Chenoweth of today tell that girl walking into the wings of Wicked and into her future?

Albums for Winter, day and night

LACES has a new anthem, “they say”

Albums worth the dollars