Eastsiders creator & star discusses the impact the series had

Eastsiders has become a beloved series in the LGBTQ community, breaking down social norms in relationships, and giving a glimpse into the lives of gay people in our society. Kit Williamson and husband, John Halbach, created their brainchild Eastsiders in their California living room. The final season was released a couple months ago, and Kit wanted an opportunity to reflect on the success of the series. He offers insight into what a special impact Eastsiders has had on the LGBTQ community.

Congratulations on the final season of Eastsiders. Tell us more about the series.

Kit Williamson: The series is a dark comedy about a gay couple living in Silver Lake, California. It’s sad, it’s funny, it’s how they make up their lives over the years. The series has jumped from YouTube to Netflix where it’s now subtitled in more than 30 languages worldwide and it’s grown into an ensemble story about all kinds of different queer relationships.

Can you tell us about a special moment on set or in the series that left a big impact on your experience?

KW: I can definitely cite one moment from this most recent season that left an impact on me. We kept calling it the “Flaming Hoop” of this season in episode two. It’s a scene where Stephen Guarino’s character, Quincy, discovers that Willam’s character, Douglas, the aspiring YouTube Drag Queen, Amber Alert, has turned their wedding rehearsal into a promotional opportunity. She hired famous drag queens and Instagram influencers to pose as their wedding party and hiring a film crew to document everything. We have a five-page scene where Quincy arrives and finds Jai Rodriguez’ character, Jimmy. He had been serving as wedding planner for all of this. Quincy arrives and discovers all of this in a five-page scene that we shot in one continuous take with a steady cam going all through this bar.

It involves 16 actors, many of them famous drag queens, including Willam, Manila Luzon, Bitch Puddin who won season two of Dragula, it involved Max Emerson and Chris Salvatore. All of these gay, famous people at one room at the same time; it’s a miracle that all their schedules aligned. A miracle that everyone knew their lines and were able to nail their placement for this highly choreographed shot. At the end of it, everybody burst into applause because we knew that we had accomplished something really big for a show in our budget because we didn’t have the luxury of rehearsing in advance. We just had to kind of set it and trust that everybody would be able to do it. And they were.

Especially this being the last season, I’d bet it’s bittersweet. I’m sure having that “wow” moment meant the world to you.

KW: It was amazing. You know, we’re a small show, largely two actors talking in a living room, probably a friend of mine’s living room that’s letting us shoot for free. We’re an Indie production. So we had the wedding. We had over a hundred extras, all of whom were Kickstarter backers. It’s the biggest thing that we’ve ever shot in the show. We had more than a dozen actors, over a hundred extras. It was cool to have that many people come together in support of making this thing that we hatched in our living room seven years ago.

To go from YouTube to Netflix is incredible. Tell us about that journey, specifically for those who strive to take a dream to the next level.

KW: It was a lot of strokes of good fortune. We had a long enlightening journey to Netflix. We didn’t just immediately get picked up by them. We premiered the first two episodes on YouTube and we were approached by Logo to premiere the rest of the season on their digital platform. We then were invited to screen the first season on the local cable channel as a TV movie. We started working with Wolf Video and they placed the first season on Amazon Prime. When that deal ran its course, they placed it on Hulu and iTunes. With season two, we started on Vimeo and then made a partnership deal with Netflix. Since starting in season two, our streaming partner has been Netflix, but keep in mind this was nearly four years into the process of making the show.

It was a long road for the show to find that audience. The audience that we found coming to Netflix was unlike anything that the show has experienced before. It was really staggering when the third season came out on Netflix as a premiere versus the end of its journey. All the tweets and messages that we were getting in different languages, including a lot of countries where being gay is illegal, is something that is really meaningful for me, coming from Mississippi, coming from the “Saudi Arabia” of the United States.

Well, the political climate across the board seems a little shocking these days. Hopefully, it’s going to be over soon.

KW: One way or the other!

This season we’ll tackle tough questions around commitment and making love last in gay culture amid the stigma of gay relationships in our culture. What message can you share with readers about healthy relationships?

KW: Don’t get too caught up in someone else’s definition of a healthy relationship. Don’t let some Libertine or some pearl clutching queen tell you how to be or who to love. We have the luxury, or I should say the privilege and freedom as queer people of forging our own path. It’s also a responsibility to not judge others and to be honest with ourselves about what we really want. 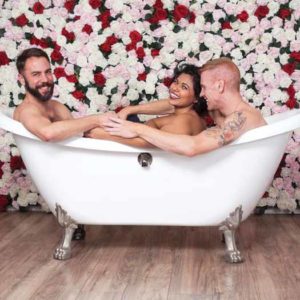 What impact do you hope to have on the LGBTQ community with Eastsiders as your vehicle?

KW: I think my goal is not to have some specific impact in terms of pushing forward any specific idea except for the idea that there are many different kinds of relationships and that we need to allow for a broad spectrum of experiences within our community. We can’t fall into the trap of telling each other how to be.

What’s next for you?

KW: I have been developing a number of projects. I’m super excited about including one that I had at the Sundance Lab last year. I’m really focused on the TV space and creating my next queer TV show.

We’ll look forward to that! How do our readers keep in touch with you?

KW: I got lucky. I got my name on all of them. Twitter is @kitwilliamson, Instagram @kitwilliamson. If you want to follow the show, although the show’s ending, its Twitter and Instagram @Eastsiderstv. I also have a Patreon to help support the creation of new queer stories and that’s patreon.com/kitwilliamson.

James Yarosh is a designer, artist, and gallerist

No trick, just a treat from Elvira

Everybody’s invited to the party on the new “L Word”