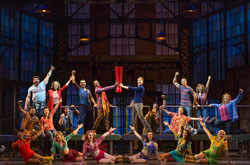 “Kinky Boots” took Broadway and the Tony’s by storm, and now they have taken the shows message across the country. The musical (with music by music icon and LGBT activist Cyndi Lauper and book by the legendary Harvey Fierstein) was in Philadelphia’s Forrest Theatre recently.

After checking out the musical opening night, I was thrilled to note that the show was just as captivating as the original Broadway production. Steven Booth was heart achingly wonderful as “Charlie” and Kyle Taylor Parker” served it up as “Lola”. The music is some of the best seen on a Broadway stage, with Booth’s heart wrenching rendition of “Soul of a Man” being one of the standout performances of the show. The intimacy of the Forrest Theatre made me feel like dancing right along with Lola’s Girls, stomping your way through the shoe factory.

One of the best parts about experiencing the “Kinky Boots” Broadway experience is the merging of that fantastically weaved story with the glorious anthems that Ms. Lauper created. Every song tells a very important part of the story, with some of them being roof-blowing dance numbers, and others being poignant ballads, pulling at the heartstrings of everyone in the theatre. Surprisingly, some of the characters that you would never expect to have so much heart surprise us the most.

I sat down with the fantastic Joe Coots, who portrays “Don” a real man’s man, working at the Price & Son shoe factory. Without giving too much away, Don becomes one of the most surprising parts of the story, helping frame the message of love and acceptance throughout the show. 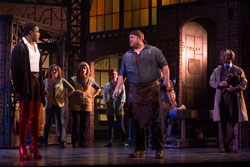 It’s rare that a Broadway show like “Kinky Boots” becomes almost like a movement with a very powerful message. What is it like to be part of that?

It’s awesome. I always say it’s a big responsibility to share that message and makes sure it gets across, and I think our cast is doing that. It’s a great message and it’s been well received so far, and it’s a lot of fun. It’s really a blast.

“Don” kind of brings the entire show together. Was it hard making “Don” your own after he was such a huge part of the Broadway run?

You know, I guess I just brought myself to it really. The guy that does it in New York is a great friend of mine, and while we look similar, we bring different things to the role. Whenever you do something like this, you have to bring yourself to the part. Whether it’s mannerisms, or it’s look, whatever it is. It’s also working off of totally different characters. You need to listen to the others and react accordingly. It’s also a huge responsibility to get the message across; your telling this story and you want to do it right. I’ve had grown men walk up to me after the show crying, telling me that I’ve changed the way they think about things. I take a lot of responsibility and a lot of pride in portraying “Don” properly, and I have a great time doing it.

Is it hard to hold so much responsibility for this community in your performance?

Before “Kinky Boots”, you’ve worked with your own set of hilarious divas, from Tina Fey on “30 Rock” to Amy Schumer on “Inside Amy Schumer’. Was it hard moving onto the stage with a different set of ladies?

You’ve worked with so many amazing people on stage; who would you like to work with on stage that you haven’t worked with?

The one that always comes to mind is Tom Hanks, I think that would be amazing. You know though, it’s not always about who you’re working with, it’s about the actual part. If it’s a good story or a good part, it doesn’t matter if it’s someone who just got their acting card or a veteran like Stritch or Hanks; to me it’s about the part.

Are there any other projects out there that you would love to be a part of?

I’ve always wanted to do “Of Mice and Men” I think I could take a bite out of that one. Playing “Don” though when you do it eight times a week and doing it for seven months, I literally love doing it, I can’t wait to get to the show every night. I haven’t missed a show out of over two hundred and sixty performances; I can’t wait to get there every night.

“Singular Sensation: The Triumph of Broadway” will make a non-fan happy, too

This is Ben Platt

How do LGBT couples maintain a happy relationship?

Supremes rule LGBTQ civil rights are secondary to the “accommodation” with...

Buy with Pride and spruce up your collection