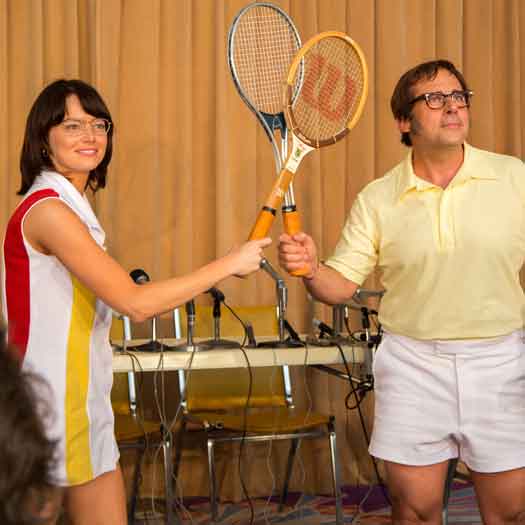 Lesbian sports pioneer Billie Jean King would, in due course, take her victory beyond the tennis court, to the front lines of equality for women and LGBT people alike. But first, there was her legendary face-off with her much older, goonish opponent, Bobby Riggs. 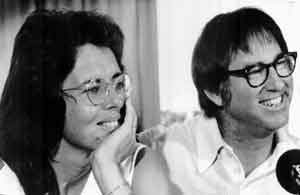 Famously coined Battle of the Sexes, the game transcended the court, marking a milestone in the fight for equality as it blazed an important trail for minorities in sports, after King crushed her sexist rival during the nationally televised match in 1973 at the Houston Astrodome.

If it sounds like the stuff of big-screen moviemaking magic, well, now it is. After 2001’s Goldie Hawn-produced TV movie starring Holly Hunter as King, named When Billie Beat Bobby, Oscar winner Emma Stone steps into the tennis champ’s sneakers to remind chauvinist pigs like Riggs to kindly take a seat. Battle of the Sexes, starring a perfectly cast Steve Carell as Riggs, is as much a time capsule as it is a timely gender-equity statement, a sentiment not lost on Stone. 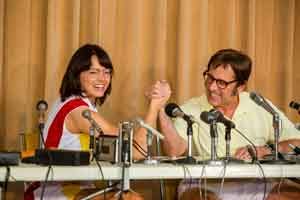 “Billie Jean is a social activist and she was always wired for social change, and she knew that from a young age,” Stone, seated next to King, recently told a group of journalists at the W Hotel in Westwood, California. “She was also great at tennis, and this was gonna be an amazing platform, if she could be the best, to change the world.”

King did, of course. But for Stone, it started with realizing the “super empowering” effects of weightlifting, wherein “physical strength equals strength out in our country or in the conversation or to further equality.” It wasn’t just muscle the actress had to gain, however — Stone had to gain an understanding of King’s history, both professionally and personally (and the latter’s effect on her game). There was also, you know, the actual tennis.

“This story is about her personal journey and personal struggle, but had this been the Billie Jean tennis movie, I never would’ve gotten it,” Stone says, chuckling. “For a novice tennis player to become No. 1 in the world in three months, it was like, ‘How?’”

To get Stone primed for her role, King joined the La La Land actress on the court, where King tossed her some balls. Additionally, Stone pored over historical footage and ample news coverage on the landmark match. Intimate conversations with King were important too, because Stone needed to engender the spirit of King at a radically different time in her life — and in the world. 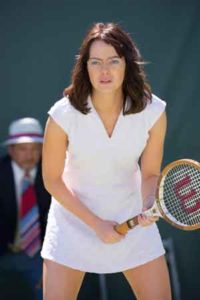 Now, Stone says, “(King) is fully informed and is able to talk about all of this with closure and hindsight and she can just see it more clearly than she might have been able to at age 29.”

Then, before King entered into a relationship with fellow tennis pro Ilana Kloss, her partner for the past 30 years, the tennis legend came to know herself thanks to an affair with her secretary, the more sexually evolved Marilyn Barnett, which began in the early ’70s. Barnett had been King’s hairstylist for several months before they became romantic and “embodies the free spirit and hope and liberation of the early ’70s,” says British actress Andrea Riseborough later that afternoon, during our exclusive interview. Known for gracefully inhabiting a bevy of real-life personas, including Wallis Simpson (in the 2011 Madonna-directed film W.E. ) and Margaret Thatcher, Riseborough didn’t have access to Barnett — in fact, she didn’t consult King either, perhaps because King’s relationship with Barnett was far more toxic than Battle of the Sexes wants to admit.

In 1981, Barnett sued King, alleging their seven-year relationship entitled her to half of King’s earnings, but King’s Counsel fought the case (and won), noting that “palimony law” did not protect gay and lesbian couples.

“Billie has gone on to have a much greater love story with Ilana,” says Riseborough. “But it was an important time in her life. A stressful time, and a wonderful time.” 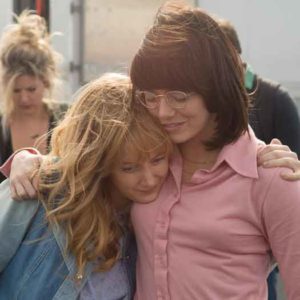 She continues: “I really have just treated her as a human being in that, if she offers something up to me, that’s wonderful. But this whole process has been difficult for her, as you can imagine, watching her own life at the most pivotal point of your life.”

Much to Riseborough’s surprise, King praised Riseborough’s Barnett as realistic despite her ex-lover’s mostly-undocumented life. Instead, select videos and a few photographs featuring a background-positioned Barnett informed Riseborough’s acting. And of course there was the script, written by husband-wife team, and Little Miss Sunshine filmmakers Valerie Faris and Jonathan Dayton.

“It was a collective effort of us all knowing how instrumental she was in the film as the catalyst of change,” Riseborough says, “from Billie feeling her body is a machine to her feeling like a sensual, beautiful thing to be explored in a healthy way.”

King’s husband at the time, attorney Larry King, would discover his wife’s secret, but insisted she focus on shattering the glass ceiling, as “Larry and I always talked about changing the tennis world” to be more inclusive.

“We were very much in it together,” she remembers, though the pair would ultimately divorce in 1987.

Repressed sexual feelings, paired with the pressure of her newfound role as a feminist torchbearer, put King in a precarious place, as she struggled to be openly gay during a time when it was especially taboo to be out as a public sports figure.

“The LGBTQ community suffers a lot, especially our young kids, so that’s why it’s so important to embrace everyone,” she says now, reflecting on her own self-discovery. “You want people to be their unique self, their authentic self. It’s so important that we all encourage (that).”

Dayton and Faris’ film examines King’s own internal torment in a moving scene where Stone breaks down sobbing in the locker room after her Riggs defeat, uncertain about her future as a gay athlete. “She was on four hours of sleep every night, (and there was) all this going on with Marilyn and Larry,” Stone says. “I was thinking about that moment in all other scenes of the film because I think she had such strength, and because she holds it together, but it’s all just right under the surface for most of the film, that sort of breaking point.”

The scene portrayed “exactly how I felt,” says King, now 73. “It was so touching when I saw it, and so authentic (to) what was in my heart at the time.”

After organizing and launching the Women’s Tennis Association in 1973, King continued to level the playing field a year later, founding the Women’s Sports Foundation. Seventy-nine cents from each ticket sold during the film’s opening weekend will be donated to the foundation via 21st Century Fox, which King finds “so meaningful.”

Certainly, King’s accomplishments are immense, both on and off the court. In 2009, she became the first female athlete to receive the Presidential Medal of Freedom, which President Barack Obama awarded her in 2009 for her work with women’s advocacy and LGBT initiatives.

“When you’re around Billie for a certain period of life, you go back into your life being reinvigorated,” Riseborough says. “You’re sort of ready to fight for justice.”

On September 9, Stone attended the U.S. Open with King, and together they reveled at Sloane Stephens’ victory. “A woman of color,” King says. “And that’s one of the things we were trying to do (in 1973) as well.”

As editor of Q Syndicate, the international LGBT wire service, Chris Azzopardi has interviewed a multitude of superstars. Reach him via his website at chris-azzopardi.com and on Twitter