The race in Lambertville is closer than predicted

The mayoral race for the Democratic candidate in Lambertville is heating up, as the June 5, 2018 primary election date nears. Julia Fahl is challenging the incumbent mayor. As an openly-lesbian candidate she is running against current Mayor David DelVecchio. Fahl has been knocking on doors, meeting with residents, and had an open discussion with current mayor. 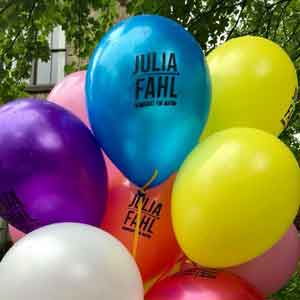 There are noticeably more signs for Fahl appearing on the lawns and porches in this Delaware River town. “I see people talking about this town,” she said. “There are so many people interested in volunteering and getting informed. One of the things that I hear from almost everyone is that they don’t hear enough from the city. I am running on opening up lines of communication in town. The city could be doing more to keeping people informed about what’s going on in town, whether it is road construction or a disaster.”

There will not be a Republican running for Mayor

The June 5 vote is a primary election. But there will not be a Republican running for Mayor in the fall. “This is the show. If you want your voice heard for who is going to be the Mayor,” said Fahl, “you have to come out in the Primary.”

Fahl said she has heard people voice their concern over Lambertville, NJ ‘starting to fray around the edges.’ She is promoting investing in the aesthetic appearance of the town with shade trees, and keeping Lambertville “clean and tidy” in response to the concerns.

Since the campaign started, DelVecchio, the incumbent mayor has been sending out more notifications regarding roadwork and street cleaning. Some have wondered if DelVecchio has already implemented her idea of being more transparent. “Both of us care about Lambertville,” Fahl said. “When I started running I said we should implement online bill pay and a couple of days later we had online bill pay. The city website put up a volunteer page. I feel I have already helped the town.”

Fahl beleives she can do a better job than DelVecchio

Speaking on the large amount of undecided voters, Fahl said, ” I think Dave [DelVecchio] has done a good job in town, but I think we can’t rest on our laurels. There are ways we can make this town run better and more efficiently. It is time to get new hands on the budget. Some new eyes are needed on the Council and to start moving Lambertville forward.”

Since she started campaigning, Julia said it is an evolving process. She said from talking to so many people in town, she has heard so many good ideas. “The system has not ample space for people to give their ideas.” She said, “My ears are open and if elected, we can continue that idea of how to improve Lambertville together.”

Fahl proposed more Council meetings and to have panels of experts. She would also like to have regular hours for the Mayor’s office so residents could stop by and express their concerns.

Fahl’s inspiration to keep her momentum going comes from two things. “The first is my wife, (Kari Osmond) who is my campaign manager,” she said. “She has been such an incredible source of positivity and momentum. I am really grateful that we are doing this project together. The second thing is that we have met some truly incredible people. It has been overwhelming the amount of support and love I have felt from Lambertville.”

Those Lambertville residents who are registered as Independents or Democrats are able to vote in the primary election. If you are an Independent, you will have to re-register as such after voting in the Democratic primary.

To find out more about Julia Fahl and the campaign

Julia will be having a Day of Action on Saturday, June 2, and a Get Out the Vote push from June 2-5, 2018. Anyone interested in volunteering should contact the campaign at Juliafahlformayor@gmail.com. They are seeking volunteers to go door-to-door and knock on neighbor’s doors. She will be doing one-on-one meetings with anyone who wants to talk to her before the election.

Julia Fahl said the most important thing is getting out and voting on June 5. You can also follow her campaign on Facebook at Julia Fahl for Mayor.

Fiddleheads, new American bistro is a shining star in the sleepy town of Jamesburg

The iced Chai Latte is a summertime winner at Union Coffee