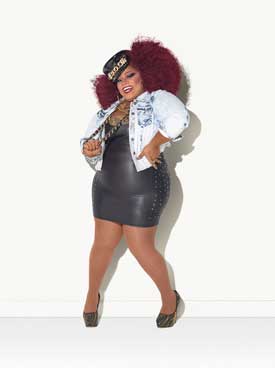 Jaidynn Diore Fierce was the true heart of this season of “RuPaul’s Drag Race”. From her infectious personality to her love of the stage, Jaidynn gave 100% into every challenge.  Sadly, the team challenge with the former queens ended up sending her home mid-way through the competition.

Jaidynn, you had so much heart this season and really seemed to appreciate being there. How did it feel to want to be there so badly and go home without being in the Top Three?

I was devastated, I am a very passionate person. When I want something in my mind, I usually do whatever I can to get it. It sucks when it doesn’t happen the way that I want it to. My emotions can get the best of me and it was happening to me the whole time during the competition. I’m not really that much of an emotional person, but on the show I was really emotional!

It is tough when you do your best and it just isn’t enough you know? That’s life though, and life moves on. The experience was definitely a life-changer and I am forever grateful.

You left during a challenge where all of the former queens that had been eliminated came back. You were paired with Tempest DuJour as part of a “conjoined twins” challenge. Was it diffficult to go home as part of a challenge that was not 100% your own and solo?

I think that’s what a challenge is; it’s not meant to be easy all the time, although it would be nice if it did. I think in the end, even though Tempest and I definitely don’t resemble each other, I must say that that was the hardest part. In my head, I was thinking that I did not want to mess anything up and have to lip synch or maybe even be eliminated. It happened, and I am grateful that she was so dedicated, and she is a truly dedicated person.

The entire “RuPaul’s Drag Race” experience can be a bit of a whirlwind. What do you think were some of your favorite moments, now looking back?

Are there any parts of the “Drag Race” experience that you really did not enjoy?

Even though I have a theatre background, one of the things I did not enjoy was the timeframe. To learn lines, usually it takes me a moment to get there and I am used to rehearsing. During a competition when you’re sitting in front of Ru and Michelle (Visage), I literally felt the pressure and started freaking myself out. You start to think that you’re on this team and you don’t to mess it up for the team or for myself. I was very into my head, and that was one thing that I struggled with. I was so focused on it; I definitely am an over thinker.

This year’s completion is so incredibly talented and it’s really anyone’s game. Who do you think could take it this year?

I agree with you, it really could go to anyone. You know, this year, they have picked a really versatile, great cast. You don’t know if it’s going to go to one of the comedy girls like Trixie or Katya, they definitely have the guts and the humor. We also have the pageant queens like Kennedy and Ginger, who are very pageant and very polished. They know what they are doing definitely; any of these girls could take it. I’m really rooting for all of them; even though the completion is over for me, they’re still all my sisters. Whoever wins this year will have my full support.

Do you and all of the girls still stay in touch?

Oh absolutely, we all have a little chat group we’re in, we text each other. Tempest actually just texted me today and mentioned how she appreciated being my partner this week. We all stay in touch.

You have a brand new road ahead of you now Jaidynn, and virtually anything is possible. What do you want to do next?

I want to get out there and perform, I want to get on tour. My passion is really getting on stage and performing. I am going to be coming out with my new hat line, based on all of the crazy hats that I wear. I’m working with a really amazing designer and you will see my hats soon, and other merchandise.

In the future, maybe some music, maybe a song or two. I would love to do a dance song. That will be down the road though, right now I’m out there making my coin.

It’s been such a crazy year for you; if you had to sum it up in one word, what would be it be?

I would say it would be my favorite word and my last name-Fierce!

Newark LGBTQ youth service agency will close due to lack of...

Adopting Church babies: NOT what the Fulton decision is about

The iced Chai Latte is a summertime winner at Union Coffee

How do LGBT couples maintain a happy relationship?

Supremes rule LGBTQ civil rights are secondary to the “accommodation” with...