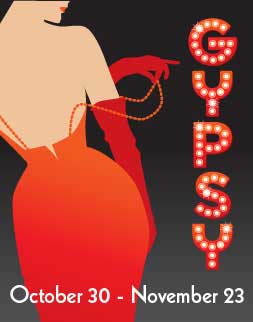 “Gypsy”, directed by Bruce Curless, is the Ritz Theatre’s last production of the season. It stars Carol Furphy- Labinski as Rose, the domineering mother who pushes her daughter onto the burlesque/ strip-tease stage as a last resort to becoming a star.

Jennie Knackstedt as Louise-cum-Gypsy Rose (Louise) Lee, Michael Doheny as Herbie, Rose’s love interest/agent for her daughters’ stage acts, and Colleen Murphy as June, the real talent in the family who escapes her mother’s grip by eloping with a fellow actor.

Ms. Furphy-Labinski, a fine actor,  does an admirable job as Rose. Ms. Knackstedt is terrific as Louise/ Gypsy, she makes a beautiful transition from being the shy, sweet, reticent sister who lives in the shadow of her more talented and mother- favored sister to the bold, brassy, supremely confident burlesque queen of the strip-tease. Ms. Murphy is also excellent in her role as June, the original daughter who was supposed become the vaudeville stage star the mother always wanted, but couldn’t be. Both “sisters” have beautiful voices.

Of note is Cambria Klein, who played June as a little girl on November 1st; she has a true, clear voice and real stage presence.

This production does two things I thought were creative and interesting. The first was to show the way Rose and her young daughters moved from Seattle to LA; it was done through a movie of them projected onto a sheet torn into strips, so it had a real “old-timey” look and feel. The second was to show the transition of the youngsters into early adulthood; this was done by doing a musical number with strobe lights during which the adults replaced the children.

All in all, “Gypsy” provides a very enjoyable evening (or matinee on Sundays), and a nice ending for Ritz’s 2014 season.

“Gypsy” runs through November 23rd. Contact The Ritz Theatre Company by phone, 856-858-5230, or online www.ritztheatreco.org for tickets and/or information. The Ritz Theatre is located at 915 White Horse Pike in Haddon Township.