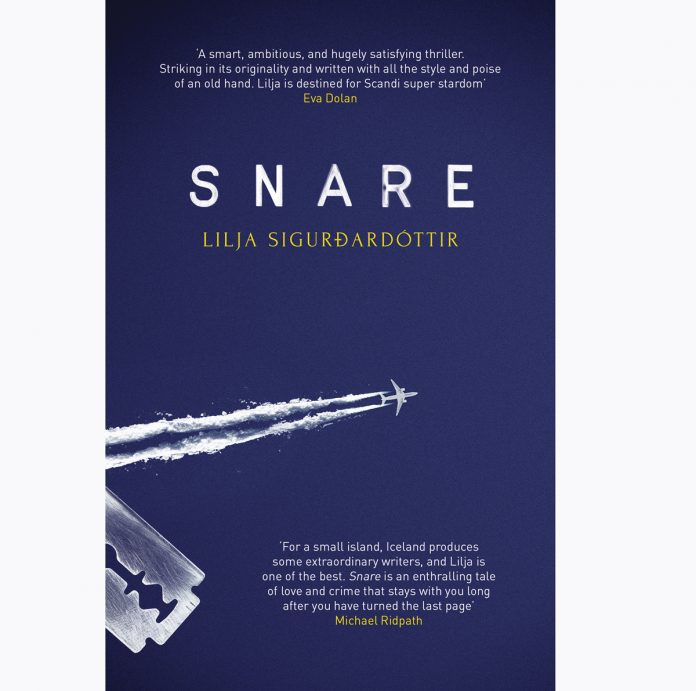 Pack your suitcase for Iceland and a lean, taut suspense novel, Snare, by Lilja Sigurdardóttir, the first in a trilogy including Trap and Cage.

Lilja was born in Iceland, where she lives with her female partner. She has published two trilogies, three stand-alone titles, and has been listed for a CWA International Dagger.

Snare takes place in 2010-2011. The reader is treated to atmospheric descriptions of the ice and snow, the long hours of darkness, and the blowing volcanic ash. The main character, Sonja, is a divorced woman who has lost primary custody of her young son, Tómas, to her husband, Adam, after he discovered her affair with a woman, Agla. He also took the house and left Sonja penniless. When an acquaintance offered help, Sonja naively accepted in order to provide for herself and save money to sue for her son’s custody. Just make a few overseas trips and return with a little cocaine, the man said.

As the novel begins, Sonja is already ensnared and has become a successful smuggler, though she’s fearful of being caught and of a sadistic enforcer, who threatens to harm her son if she stops transporting drugs.

Sonja is a lesbian in an erratic relationship with the hard-drinking Agla, a high-level banker under investigation for market manipulation. Sprinkled throughout are narratives by her son, which reveal the tender love he shares with his mother. Another narrator is Bragi, a senior customs inspector, whose wife has dementia and is in a care facility. He desperately wants to bring her home but can’t afford to pay aides. When Bragi notices Sonja and suspects she’s a smuggler, another plot angle develops.

The author, Lilja Sigurdardóttir, said the idea for Sonja came from her own unintentional smuggling experience. “I didn’t know that certain types of salamis were forbidden in Iceland, so I was shocked when a big man in uniform took my delicacy away.”

Snare is stylistically linear. Once we get on board this thoroughbred tale, the novel takes off at full gallop.

“Boy with the Bullhorn: A memoir and history of ACT UP New York” is not a vacation read

“Dot & Ralfie: A Novel” is a lesbian “Honeymooners” episode, only much sweeter