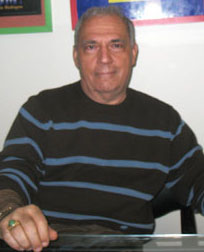 Motivated by a desire to continue to make change in the lives of LGBT individuals, Pride Center of New Jersey Board President David Rogoff started an activist forum, “I think it’s a natural extension of being a pride center.

I want everybody that comes here at some point to understand that just by virtue of coming to the pride center as a gay person and by working on coming out, by working on healing the scars of the damage of whatever they were taught about themselves and the okayness of who they are as people, just by the decision to work on that by changing themselves, that they’re also changing the way their families see them.

By identifying openly and proudly on the main street of a town as an openly LGBT person, one is in the process of participating in changing how society looks at us and treats us. So already there’s that sense that I have that what we’re doing and our very being here and everything we do here is a form of activism and that’s contributing to changing the world to be a better place. And I think that’s what activism is, basically. It’s working to fix the world”

Mr. Rogoff went on to say,  And for us, it’s working to fix the damage of millennia of the way that people who are different in this particular way are treated. So if that’s already happening, why create a forum? Well, it’s like everyday is Valentine’s Day, but you make a special day for Valentine’s Day, because love, romantic love, the love between two people is something worth celebrating, highlighting, by creating a forum I want to bring attention to the fact that our enterprise here is an activist enterprise in general, but it does go beyond that. I want to use the activist forum as a place to bring attention to the work that’s going on in the larger gay world to make life better for LGBT people.”

The forum is slated to have a speaker come this spring from Lambda Legal Defense, which fights for gay rights. Rogoff explains that the organization had to fight for its own existence. “To establish themselves as a not for profit organization in the state of New York, they had to overcome a panel of judges that declared that their enterprise was not for the good of society; that it was not a wholesome enterprise. Imagine that. So they had to fight for three years, talk about activism, to establish themselves as a not for profit organization with a tax-exempt status. They had to do fundraising to support their efforts and now they’re nationwide.”

David Rogoff President at the Pride Center of NJ. Photo by Daphne Kannellopoulos.

“Now, living here in New Jersey, people may not realize, it’s easy to take for granted that we can walk down the street holding hands or we can hold hands with our loved ones in restaurants or we can register together in hotels and not be kicked out or that if we have the social courage to come out at work, we can’t be fired for being gay.” Rogoff adds, “That’s the state of New Jersey. Most places in the United States today, you can still be fired if they find out you’re gay.”

Rogoff asserts, “I think it’s important for people to understand the recent history in the state of New Jersey.” Rogoff notes that the non-discrimination clause was only extended to sexual orientation in the early 1990s. “Up until then you could be kicked out of your apartment if your landlord found out you were sleeping with a person of the same sex. You could be kicked out of a restaurant for looking too gay with each other and a bar could be closed up until the end of the 1960s. And it was the Den that fought the case in the state of New Jersey.”

Rogoff explains that it was against the law in New Jersey to serve alcohol to a known homosexual until the end of the 1960s. “Police would raid gay bars, they would see gay people, ‘obviously’ gay people, because of how they held their wrist or the way they helped each other off of bar stools. That’s the kind of evidence that police would present in court of how they knew the people were gay and they were served alcohol, fine the bar and round up people and throw them in jail. For people to be activists in a sense larger than just coming out, which is no small thing in itself, it’s important to understand the history and the rights that were won and what it took to win those rights and how easily those rights can be taken away.” Rogoff reminds us, “Whatever rights we have and whatever protections we have we have by virtue of laws that have been fought for and won, but that could easily be taken away just by repealing that law. And so the goal of the activist forum is to raise the awareness of gay history and what it took to achieve the rights that we take for granted and to hopefully inspire people to take an activist role themselves in supporting some of the organizations like the ACLU (www.aclu.org), Lambda Legal Defense (www.lambdalegal.org), and GLAAD (www.glaad.org), which monitors the way we are treated in the media in advertisements and TV programs.”

Rogoff feels it is important to have an activist forum because “there are forces arrayed to oppose our equality and that are prepared to tear down what we’ve built up and we can’t let that happen. To give you an example, last year at the Highland Park street fair, we had a table, the whole town of Highland Park is in the street, it’s a beautiful day, families, individuals, the old, the young, and we had a table as we have year after year. Somebody came up to the people staffing the table and said, ‘What are you doing here? This is supposed to be a family event.’ That was one person. For the most part, the response was very warm. We have a good relationship with the town of Highland Park. Main Street Highland Park has a Web page for us on their Web site and they want to post our major events on the town’s calendar. We’re doing good, but there’s still people who feel like ‘what are you doing here?’ and are threatened by our existence and are prepared to oppose it.”

Did the recent suicides have anything to do Rogoff’s decision to start the forum? “Maybe. On a day to day basis, there’s enough crap being thrown at us that that I think that’s enough to have gotten me to want to do this, but certainly that rash of suicides makes it clear that we owe it to the younger generation of gay kids coming up to show that the world can be better than it looks right now. But we have to make it better and we have to make ourselves visible so they can see that it’s better. When I was growing up, the only gay person that was visible was Liberace and he was a novelty, he wasn’t a real person.”

The LGBT Activist Forum runs from 8:00 to 9:30 on the third Monday of every month. In addition to serving as president on the board of directors at the Pride Center of New Jersey, David Rogoff is also a psychotherapist in private practice in Highland Park.

Motivated by a desire to continue to make change in the lives of LGBT individuals, Pride Center of New Jersey Board President David Rogoff started an activist forum, “I think it’s a natural extension of being a pride center.