George Street Playhouse is presenting us with two new items for our theatre-going pleasure. One is their new temporary space on Rutgers University’s Cook College campus. The other is a revised revival of the musical revue I Love You, You’re Perfect, Now Change by George Street favorite Joe DiPietro, author of plays (Clever Little Lies) and musicals (The Toxic Avenger; Ernest Shackleton Loves Me) previously presented at George Street.

First, the theatre space. Starting from scratch, the crew at George Street Playhouse took Agriculture Hall on College Farm Road and transformed it over the summer into an intimate 190 seat theatre. The auditorium is tall and wide, with industrial aluminum scaffolding used to define the proscenium as well as for hanging lights. If the seating looks familiar, it should — it was taken from the old theatre on Livingston Avenue before the building was demolished.

The theatre is also more accessible to patrons with mobility difficulties. The first three rows are at stage level, the steps to other rows are low and deep, and the restrooms are on the main floor. The box office and main lobby area is more spacious and open, and there is even an outdoor covered patio space. One can hope that this handsome theatre space will be preserved for future productions even after George Street Playhouse moves into the new performing arts center on Livingston Avenue in 2019.

For the first production in this new space, playwright/lyricist DiPietro is joined by composer Jimmy Roberts to take a fresh look at I Love You…, which ran from 1996 to 2008, the second longest-running off-Broadway musical in New York theatre history. Like most revues, some sketches are funnier than others, some songs click while others don’t, and every different audience has its likes and dislikes. At the performance I attended, although there was some good material in the first act, the audience didn’t warm up to the show until after intermission.

The show takes a light-hearted look at love, romance, and relationships. While each scene is independent from the others, there is a rough arc starting from first dates through the minefields of relationship dos and don’ts to marriage, from raising families to the ends of relationships. The script and numbers have been updated to include contemporary references.

New adoptive parents are now a gay male couple. A new number is about men texting pictures of their privates to women. A sketch about making a dating video on tape becomes about dating via the Internet. Yet other sketches and numbers remain mostly the same, reflecting on such universal themes as nudging parents, finding time for romance after marriage, the lack of suitable dating partners, and overcoming doubts and uncertainties that are a part of relationships no matter their length.

Director David Saint makes sure the pace of the show moves along smartly, and the talented cast of four is engaging, funny, and touching. Karen Burthwright stands out as a woman anticipating the start of a romance with a familiar friend in the ballad “I Will Be Loved Tonight” and as a 40-ish sharp-tongued Caribbean woman making a dating video for a website. Lindsay Nicole Chambers scores with her solo “Always a Bridesmaid”, and partnered with the talented George Merrick in sketches about older people finding romance at funerals and an entire modern romance elapsing before the couple has their first date. In a sketch about a mature man in a decades-long marriage, Mitchell Jarvis scores with the ballad “Shouldn’t I Be Less in Love with You?” while showing his comic flair in the number “A Stud and a Babe” partnered with Ms. Burthwright.

Charlie Williams’ choreography, although mostly limited, shines in the number “On the Highway of Love”, in which the cast careens around the stage in wheeled office chairs, narrowly missing each other, representing four squabbling family members in a car headed to a family gathering. Jim Youmans’ spare multi-purpose sets are enhanced by his use of projections shown on a massive video wall. A smart four-piece ensemble led by Joshua Zecher-Ross provides just the right accompaniment to the musical numbers and between-scene music. 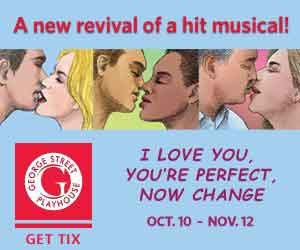 For a pleasant evening with a talented cast, and for the pleasure of discovering a new theatre space in New Jersey, take yourself and someone you love to see the George Street Playhouse’s season opener, I Love You, You’re Perfect, Now Change.

I Love You, You’re Perfect, Now Change is being presented by the George Street Playhouse on the Cook College campus of Rutgers University in New Brunswick through November 12, 2017. For tickets and information, visit GeorgeStreetPlayhouse.org.