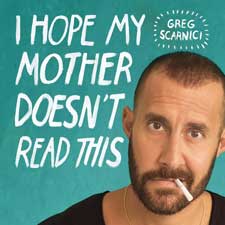 From making music with his band Undercover to DJ’ing at The Monster for his monthly Below Tea party with Robin Byrd (last Sunday of the month from 6-10 p.m.) it’s amazing that Greg had the time to write his hilarious new book I Hope My Mother Doesn’t Read This.

The book is filled with many stories that are, shall we say, definitely “Greg Tested, and Not Mother Approved” and each one is better than the next. Greg sat down with me to chat about what his own mother thought about the book, his thoughts on aging divas, and what story perhaps didn’t make it into the book?

Your book “I Hope My Mother Doesn’t Read This” is not only hilarious, but a really wonderful read! I have to ask, has your mother finally read the book, despite the title?

Believe it or not, she finally did! The day that it came out she downloaded it on her Kindle. Her initial response was “a page turner.” I finally actually got to speak with her on the phone and she said that “there were definitely parts I skipped over, any mother would”! That was the end of that. LOL!

There were things any Mom probably could read, while other sections she definitely would want to skip. Hearing about your “gay voice” and expressing ourselves is so hard for some people. How did you finally find your own voice and channel a way to express it?

I think I always was able to express it, I just didn’t have validation from the outside world. Nowadays, you get that so readily. I think when I started doing stuff on YouTube back in 2007, I started to say to myself “Wow I can actually do some super-gay shit and people will really respond to it”!

So it’s like the whole world opened up for you at that time?

Yes. And their holes! (Laughs)!

Your music and performances are notoriously, simultaneously risky and gut busting hilarious. Was it hard putting your special brand of humor onto paper and then fighting the urge to write and rewrite everything to maybe make it more “PG-13”?

Not really. Writing is amazing and fun. What sucks about it, as you know, is going back and rewriting. I cannot tell you how many times I had to go back and rewrite this book. Every sentence I would pour over and it’s just annoying. It’s trying to make it interesting and not second guessing myself. I finally just put whatever the fuck I wanted to put in it really!

There were maybe one or two stories that I definitely did take out though, they definitely were too much!

What’s one story that you ended up taking out?

Hmm. The story about how I had sex with all the boys in the neighborhood when I was “underage”? It’s sort of segued into sex in a buddy booth and I just left it at that.

No, when it comes to being a fan yourself, Grace Jones is your absolute icon isn’t she?

I love her! I host a monthly party at The Monster in New York City with Robin (Byrd and I love playing classics like “Do Or Die” and “I Need A Man.” I love that Grace just doesn’t give a shit.

Madonna is also sprinkled through “I Hope My Mother Doesn’t Read This.” What do you think it is that makes gay men gravitate towards such strong women like Grace Jones and Madonna?

Well, I think that gay men are intrinsically attracted to “divas” right? What makes those two stand out is that they are absolutely fearless. I think not being afraid of their sexuality and pushing boundaries, things that we definitely need to embrace actually. I think that attitude resonates a lot with gay men.

What do you think when people may say that Madonna or Grace Jones are of the age that they should “hang it up”?

People say terrible things about Madonna, but you know, I never hear that about Grace Jones. I think Grace isn’t on the same level of Madonna in terms of staying relevant and current, so that definitely keeps Grace out of the crosshairs. I think Grace is just doing her shit and that’s that. Grace Jones is doing a show at AfroPunk, while Madonna is showing off 9,000 pictures on Instagram and much more concerned with staying current.  I say do what’s in your soul; it may skew older, but be true to yourself.

Speaking of good music and divas, what would Levonia Jenkins, your musical alter ego have to say about “I Hope My Mother Doesn’t Read This“?

She would probably say “when’s the audio book coming out, because I don’t read”!? She only reads people.

With the release of “I Hope My Mother Doesn’t Read This,” things are happening so quickly for you. What’s one word that comes to mind when you think of your life right now?