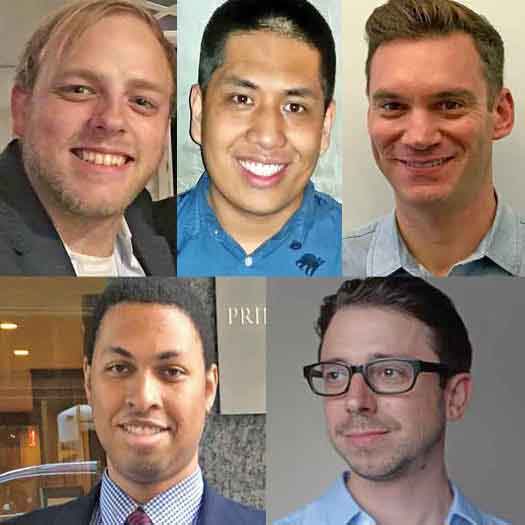 Garden State Equality is New Jersey’s largest advocacy group for the LGBT community. Founded in 2004 by activist Steven Goldstein, the organization has fought for marriage equality, transgender rights, anti-bullying, youth, and seniors. GSE has organized town meetings, the Equality Walk, and grassroots campaigns to help communities in need.
Last summer in 2016, Caleb Simmons approached Garden State Equality’s executive director, Christian Fuscarino, about starting a group for LGBT millennials. Mr. Simmons felt it would give them an opportunity to get together and work on issues affecting their community.

In this uncertain political climate, they would have a safe place to share their ideas with other young professionals, and raise funds to support the needs of the LGBT community. Thus, the Young Professional Board came to fruition.

Caleb Simmons is a staff writer for Silicon NYC, a syndicated tech blog and media company. It provides technology news, startup information, and advice to the tech industry in New York Writing poetry since he was 12 years old, and now writing a blog is one of Simmons’ passions. Simmons also loves to hike in national parks. He said he hopes to see “A healthy and increasingly progressive focus in not only the New Jersey legislature, but all legislatures, including Congress, on extending non-discrimination protections to LGBTQ Americans.” He added that, “So many young LGBTQ people of color face unfavorable circumstances, simply by virtue of not being culturally compatible with opportunities that could bring them socioeconomic mobility.”

The Young Professional Board is co-chaired by Neil Abadie. The core team members are Brendan Neal, Benjamin Feldman, and Michael Cruz. Every member brings something different to the team and together they create their vision. Having political experience is common among the team. Caleb Simmons is a district co-chair and leader for the Montclair Democratic Committee. He is also on the board of the LGBT Victory Fund and Institute, the Democratic National Committee’s LGBT Advisory Board, and the Campaign for Presidential Youth Council.

Abadie was the campaign manager for Michael “Billy” Bisogno, who ran for a downtown city council seat in Jersey City before dropping out of the race in September. Abadie said, “Now, more than ever, I think it’s important for younger generations to be involved in politics. We have to be the change we want to see on the local and national level.” Abadie is the chief technology officer for SafeBus, which installs GPS systems on school buses nationwide, provide a fleet management system to participating schools, and developed a mobile app to alert parents and children as the bus approaches the bus stop.

Abadie says he is a huge nerd and when he’s not “geeking out inside” you can find him outdoors hiking or with his friends. “While I love technology, I’ve learned in recent years how important it is to be present, unplug, and reconnect to nature.”

A common thread among them is the present federal administration’s threat to human rights. Abadie said, “Ask your most progressive friend if they know that there are still states that you can be fired for your perceived sexuality. The response I usually get is enough for me to be reminded that maybe I live in a progressive state and city, but not everyone is that fortunate.”

Having joined the Young Professional Board for the common good of the young LGBT community, they all agree that it is important for LGBT youth to continue advocating for their rights, and not to have those rights taken away. “I immediately noticed a gap in targeting my peers, young LGBT professionals,” Abadie said.

Neal also realizes the importance of keeping young LGBT professionals aware. “We definitely don’t remember a time where we were actively suppressed by society at-large, and I think that, especially given the political circumstances, that has the potential to be very damaging.”

Benjamin Feldman has been working in politics for 16 years. He is a political coordinator for Central New Jersey, and the director for LGBT outreach for Phil Murphy’s gubernatorial campaign. He said his job keeps him busy, but when possible he’ll go see a show with friends or have a quiet dinner with his family. Feldman said, “Even in a state as accepting as New Jersey, we still see acts of intolerance and even cruelty. I’d like people outside of the community to realize that members of the LGBT community have many of the same goals as everyone else, being able to build a life, raise a family, have a home, and succeed at work.”

Michael Cruz is an educator and a school operations manager. He also works with several nonprofits and the Stanford University alumni community. “Protecting the rights of everyone in the community is a core value,” Cruz said. “I believe strongly that we, as young, queer professionals, have an obligation to ensuring that the Garden State continues to be a leader in ensuring that Lesbian, Bisexual, Gay, Trans, and Queer rights are protected.”

As the Young Professionals Board have enlisted their generation, it is everyone’s obligation today to protect all human rights. Their diverse careers bring to the table a myriad of experience, and different ways to approach a problem.

The Young Professionals sponsored a Pride Reception in June 2017 in Asbury Park to “inject the millennial generation into NJ’s LGBT policy discourse.” If you are interested in joining or learning more, go to gardenstateequality.org.

Gordon Pulaski was a creative genius in New Hope community

Fiddleheads, new American bistro is a shining star in the sleepy town of Jamesburg