Former Governor Chris Christie received the lowest approval ratings for any governor, in any state, late last year, as determined by Quinnipiac University. He had an 81% disapproval rating. So, after a tumultuous eight years, riddled with controversy and scandals, republican Chris Christie’s term came to an end on January 16, 2018. Democrat Phil Murphy officially became the 56th Governor of New Jersey.

Murphy has been a welcome change to many. He is determined to bring many firsts to the Garden State including legalized marijuana, free education, and a plethora of additional ideas which have many pondering if they are possible.

In his first LGBT media interview since taking office, Governor Phil Murphy sat down for an open-ended discussion.

The State of New York and California have grants, which fund part-time Executive Director salary positions for up to a year for LGBT Community Centers. The grants pay the salary so that the LGBT Centers — with real leadership for one year — can grow their grant writing, volunteer, subscriber base and presence in the communities they serve. This is something sorely needed in New Jersey as most of our LGBT Centers are barely hanging on. Can you be specific in your promises to the community? Also, can you promise action soon?

Phil Murphy: We see the LGBT community as one of the central, defining communities in our state. This encompasses everything from civil rights, to how we assemble our leadership. I am incredibly proud Sue Fulton is heading our Motor Vehicle Commission. Once we achieved marriage equality in New Jersey, many observers believed the job was done; however, we all know better. There is still a lot of work that needs to be done, including particularly where transgender realms are concerned. We are the most diverse state in the nation. No community exemplifies that diversity, that pride, better than the LGBT community. We want folks to say, ‘We look at the team you assemble, Governor, we look at what you stand for, we look at the legislation you are pushing forward, and there is no better state as it relates to the complete and universal embracing of the LGBT community, than New Jersey.’

LGBT Homelessness has always been a problem. It is exacerbated by the fact that many teens who identify as LGBT, especially gender-variant, are not supported by their families once they come out. There are very few services in the State geared to LGBT teens that are homeless. Project RAIN in East Orange needs more assistance and LifeTies in Ewing Township needs real help. They both need to be better known in the LGBT community — and in counseling centers statewide — so that the services they offer are available before teens become addicts and/or work the streets. Are you aware of this problem? Are you willing to push for more programs like LifeTies and RAIN Foundation?

PM: Yes and yes. In fact, we honored Elaine Helms, the founder of Project RAIN, in a drum flag ceremony weeks ago. She is a rock star. I am also very close with Salem County native David Mixner. I attended a benefit with him weeks ago in which the proceeds went to a LGBT homeless shelter build out. We are completely aware and open to figuring out intelligent methods to get those organizations more support. This is a much larger problem than those who are not a part of the community realize. We need to partner the support. We need to shine light on what the sad reality is whether drug addiction, prostitution, etc. which leads to the homelessness these folks are up against. I want to do something about it. We should probably invite several of these organizations to come to the Governor’s office, sit down with me and figure out, with my commission, where the gaps are as well as ways to close those gaps.

What obstacles remain in the way of full legalization of marijuana? How soon until we see it legalized in the State of New Jersey?

PM: There are still obstacles, which remain. However, I am optimistic. We placed a target date in our budget of January 1, 2019. I believe we can achieve that. And I understand it is not an easy rollout. I am a father of four kids under the age of 21, and it wasn’t easy for me to get here. However, when you look at the huge social injustice, and sad reality which is born out of low-end drug crime convictions in addition to the white/non-white disparity of persons incarcerated in New Jersey being the widest in the country, getting this solved is a huge opportunity for us — the lives it will impact in society in general. This is the driving reason for me. Others merely want to decriminalize marijuana. However that just doesn’t do it for me. It keeps the business in the hands of the bad guys. Our kids are still exposed. We don’t tax it, we don’t regulate it, and in turn it doesn’t solve the social injustice reality. Adult-use marijuana legalization is something we are committed to. It won’t necessarily be easy or overnight. Yet I am confident we will get there.

Currently, New York State offers a free community college program. You are in the process of pushing your own initiative with a proposed budget for families and/or individuals whose income levels are below $45,000 annually — correct?

PM: Yes. This is a $50 million dollar first-step and three-year phase-in of a much larger rollout. Ultimately, the income levels will be lifted over years two and three, and it will be free community college for everyone regardless of circumstance.

How quickly and efficiently do you plan to roll out this admirable program? Do you foresee everything going according to timeline?

School shootings are on the rise

In light of the Parkland shooting massacre, what are your plans to improve school security? Do you believe arming teachers is the right decision?

PM: I think it is ludicrous. Let’s keep security in the hands of those who are trained to provide security. I am not a supporter of arming teachers. School security was already an important topic prior to Parkland. It has become even more important now. We have had multiple ongoing meetings among the Department of Education, Homeland Security, state police, local police and local authorities to try to tighten up our protocols as best we can. This is one of those situations where you can never be satisfied. You always have to be worried about fighting the next war, not the last war. We need stronger gun laws and we need more transparency around gun-related facts. Hence, we are pushing and ready to sign the gun laws, which the assembly has passed. We formed the “States for Gun Safety” which is a coalition of states.

The reality in New Jersey is that over 80% of gun crimes are committed with guns from out-of-state. Thus, we have to work with other states. We are now going to publish monthly and quarterly. We are going to name—and shame—states which export guns into New Jersey. They are typically states with lower gun-safety laws, whose guns are used in crimes to injure and kill people in our state. We have many balls in the air. And ideally the combination will get us closer to a safe society, which we are working towards with great vigilance.

The future of Atlantic City 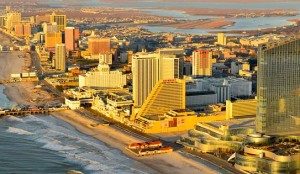 What are your plans to turn around Atlantic City?

PM: That is a big one. Atlantic City is off the map. We paid a huge price for that. The downsizing of those five casinos meant thousands of people lost their jobs. And homes went into foreclosure. We can’t forget that, and we can’t leave them alone. But it is off the map. I am proud of the person we have appointed to be our liaison with Atlantic City. Jim Johnson is a former federal prosecutor and a brilliant community-oriented guy. I am optimistic that AC’s best days are ahead. There are issues we still have to solve there. I want the state to be seen as a partner, not as a bigfoot into the community. I want us to be a reliable, ongoing partner in the community, and I am confident we can achieve that.

What can or will the state do to help ‘dreamers’?

PM: Bless them. We have a governor who has their back. I will push back on wrong-headed immigration actions by the Trump administration. We stand for safer cities. The state will give dreamers access not just to in-state tuition, but to in-state financial aid as well. I will have their backs. Because I am driven by the poem at the base of the Statue of Liberty. That is the America I know, that is the immigrant nation I know. And that is how we will govern and lead New Jersey.

Governor, any last words for our readers?

PM: I remain committed to supporting the LGBTQ community and I look forward to working with LGBTQ advocacy groups to ensure equality for all New Jerseyans. I have directed my team to engage with the appropriate parties to explore all available options for state support.