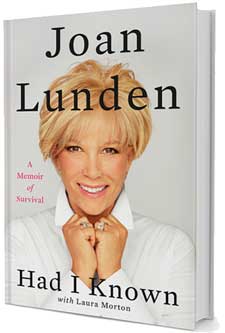 Books are almost a form of currency, they are valuable items of mine to trade with others, and a constant treat to receive. During the holiday season this year, I received almost ten books. Half of which I have already poured through and sent off to someone else. These books are the most inspiring, the most thought provoking, the absolute best of the last season.

While no one ever “thinks” they will get cancer, Joan Lunden was one of those powerhouse women who you think nothing bad would ever happen to. She woke us up every morning on Good Morning America and became virtual “family” for many Americans. Coming out publicly with cancer on the cover of People magazine with her head completely shaved bald-created a media sensation and made her an instant advocate. Lunden details her journey in Had I Known-A Memoir Of Survival (Harper Collins). From the initial and frightening diagnosis, straight through her agonizing and endless treatments, Lunden spares no detail in her journey back to health.

Lunden fills her story with invaluable pieces of information for cancer prevention, while also showing that just because you have a debilitating disease, life certainly does not have to stop. Lunden and her story serves as an example to anyone fighting this disease. Each chapter is prefaced with a thought provoking quote from a public personality fighting this disease. Lunden’s longtime co-host Charlie Gibson even makes a cameo appearance, grab a tissue for this particular chapter. While celebrities from many walks of the industry release tomes on their ‘stories” Joan Lunden has set a standard with this one.

New Jersey’s own Michelle Visage has already made her home state insanely proud, from her stint as a member of the female trio, Seduction, to her long awaited seat at the judges table on RuPaul’s Drag Race. But one of her greatest accomplishments, and one that seems to be an ongoing theme through her life, is her support of the LGBT community.

In Visages’ The Diva Rules (Chronicle Books) she tells of how our community has been a part of her life and heart for as long as she can remember. Visage sprinkles in her own dose of life advice (i.e. Rule #8-Keep Your Shit Together) while giving us first hand accounts of her life experiences. Visage definitely spills the tea, from hitting the stage with Seduction (and the fall out that followed when the group disbanded) to finally making it to the judges table on RuPaul’s Drag Race (and you find out exactly why Visage was not part of the first two seasons). Every page shows the love and “mother hen” vibe that Visage demonstrates to the girls of Drag Race both on the show as well as on the “Battle Of The Seasons” tour. Carrying a copy of The Diva Rules is almost like having Michelle Visage in your pocket at all times, and who doesn’t want that?!