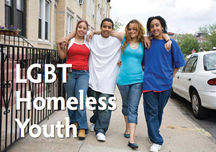 A new nationwide campaign is calling for as many as 22,000 beds for homeless youth estimated to be on the streets. Garden State Equality in Montclair says it is proud to join in the efforts of the National Coalition for the Homeless and the Ali Forney Center as they launch a grassroots campaign to demand a national response to youth homelessness.

The campaign is urging a federal commitment to provide all youths age 24 and under with immediate access to a safe shelter. Advocates say the principle that no young person in the United States should be left homeless in the streets is a given. They want a commitment to add 22,000 beds – a number that corresponds to the

number of youths identified in the most recent “Point In Time Count” of homeless persons conducted by the federal government. The 30 affiliated groups are asking for an accurate and comprehensive effort to count the number of homeless youth in the nation in order to determine the number of beds that are needed over the next decade.

On June 2nd the National Campaign for Youth Shelter will hold a rally in New York City to launch the campaign as a priority within the LGBT movement. LGBT youth are disproportionately over- represented in the homeless youth population. Estimates of as many as 40% of the nation’s homeless youth are said to be LGBTQ, while only 5% of the overall youth population is LGBTQ.

A second rally will be held in Washington DC later in the year by a broader coalition of organizations also impacted by youth homelessness. Currently, there are only approximately 4,000 youth shelter beds in the entire United States. As many as 500,000 unaccompanied youths experience homelessness each and every year according to advocates for the homeless.

“Garden State Equality‘s work is not over, especially when LGBT youth, often rejected by family, friends and the community, struggle to find safe and secure housing and care,” said John Mikytuck, Interim Executive Director of Garden State Equality. “It is imperative that we educate our elected leaders and community members that our youngest and most vulnerable need their attention and assistance. We will continue to be ever vigilant in protecting the rights and safety of the LGBT community.”

“It’s indefensible that our nation would abide hundreds of thousands of young people to be homeless and on their own,” says Jerry Jones, executive director of the National Coalition for the Homeless. “The National Campaign for Youth Shelter will highlight the urgency of basic emergency shelter as we work toward permanent solutions to this crisis.”

“It is unprecedented to have so many LGBT organizations join together with prominent national housing and anti -poverty organizations to fight for the humane treatment of impoverished youths.” says Carl Siciliano, executive director of the Ali Forney Center. “With all this support, the National Campaign for Youth Shelter will build a movement to finally prevent youths from being left to suffer homelessness without access to shelter. The wealthiest nation on earth must not allow its youths to be left out in the streets.”

Over 30 organizations have already endorsed the National Campaign for Youth Shelter, including Garden State Equality.