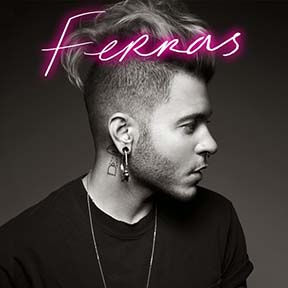 Ferras is the first artist to be signed to Katy Perry’s new label. His self-titled EP demonstrates why. The first single “Legends Never Die” (with a helping hand from Perry) is breathtaking, and based on the remainder of the EP, Ferras has a long career ahead of him.

He spoke with me about how he met with Ms. Perry, his new EP, and what it’s like to perform for huge audiences like he this summer tour with Katy Perry.

You’re the first artist on Katy Perry’s Metamorphosis Music record label. How does it feel to be the one to kick off the label with her?

Take us back a little bit; how did your relationship with Katy Perry go from meeting her to being the first artist on her label?

We met as label mates in 2008, and we both got signed to Virgin Records at the same time, actually within a few months. We shared an A&R guy and he really wanted Katy and I to be get to know each other. I was preparing my own record at the time, so it was hard to think about getting to know artists who were going to be competing with me on my own label, but we finally got to meet. She was awesome, crazy, fun, and amazing and we became great friends. Our friends became friends and now we have a group of friends that have grown together.

We were in Paris a couple years ago for Fashion Week and Katy asked me if I would come for a meeting with her, and she told me that she would be starting her own label and asked me to be the first artist on that label. I said yes immediately and we got the wheels in motion. It’s definitely been a crazy ride and we’re only just beginning.

How would you describe your self titled EP?

I think it’s a pop record with a lot of different texture. There are definitely some darker textures to some of the songs, even the ones that seem kind of more “up”. I’m a songwriter, so I definitely tend to write about what I’m going through at that time. All of my songs definitely should be a reflection of what I’m going through at that time. This collection of songs is where I have been at over the last couple of years. There are some higher moments, like in “No Good In Goodnight”, meeting someone and having that one moment with them where it’s just all about the sex. Then you have tracks like “King Of Sabotage”, which was a very low moment; when things are going well, you end up fucking it all up, because sometimes there is just comfort in chaos when you are the kind of person I am.

As an artist who is just hitting their stride, is there any artist that you would love to collaborate with?

I was such a fan of Whitney Houston, I am so sad she is gone, there’s just something about that woman. I really am lucky to have collaborated with Katy though. There are tons of people that I am a fan of, I would be so honored to work with people like David Bowie, Elton John, Prince, Rhianna. There are also some artists that I am not a fan of, it really just depends.

So you’re hitting the road this year on tour with Katy Perry. Are you excited to take your music on the road?

Absolutely, especially with the kinds of venues that Katy is playing! That’s a whole different beast, I’m used to playing for like, 100 people. So now, playing for 20,000 is a bit jarring, but in the best way possible.

Are you hard to get past the huge amounts of people that you are now performing for, or is it a case of just hitting the stage and vibing with the music?

You know, I will tell you this, two shots of tequila right before you hit the stage really helps your nerves!

Ok, if you could give me one word to describe where you are right now, what would be?.

Wow… fuck! Can that be my answer? Laughs!