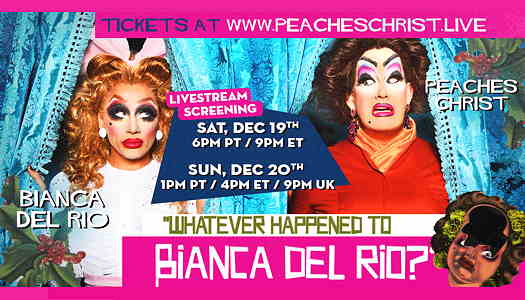 Peaches Christ, a longtime expert on the intersection of horror and bitchery, has wanted to pay tribute to What Ever Happened to Baby Jane? ever since she first began her Midnight Mass movie series nearly 25 years ago. But it wasn’t until she met RuPaul’s Drag Race Season 6 champion and superstar comedian Bianca Del Rio that she knew she’d found her perfect Baby Jane. “It’s one of my favorite movies ever,” Del Rio says. “There’s no modern equivalent of two actresses who hate each other as much as these two did. Everybody is too PC now, trying to be happy and pleasant and not offend anyone. Back then it was really good and dirty. Bette and Joan were brilliant women with amazing careers and balls.”

Del Rio will star with Peaches Christ in What Ever Happened to Bianca Del Rio? Audiences will find out what happens when two aging drag sisters live out their twilight years together in a hag-arrific house of horrors. Baby Bianca is a former child star who wants to revive the show she made popular as a little girl, when her hit song “I’ve Written a Letter to Draggy” dominated the vaudeville circuit – but her drag sister Peaches proves to be a burden on wheels.