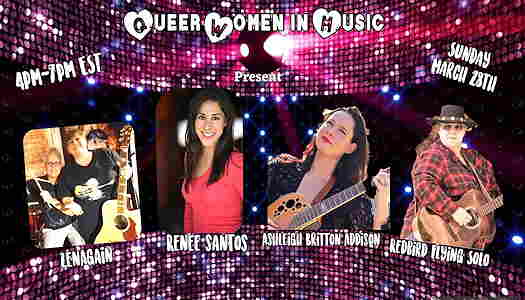 QWiM celebrates women all month long, but especially on this day, we will be celebrating virtually by bringing you these talented artists, some once again, some new for the first time!
Please lend your support…as always,
QWiM’s mission is to provide a platform for artists to continue to express their art in lieu of having lost their gigs due to the pandemic that began a year ago.
Some are rebuilding slowly but some haven’t recovered still.
Please keep in mind they are volunteering their time to share their gifts and talents, so please consider a donation into their Venmo/PayPal.
The information listed under their Bio which will also be made available during the Livestream!
Each performer will go LIVE on this page at their designated time.
www.facebook.com/ThatAmethyst/live_videos
4pm- RedBird Flying Solo- (aka Danielle) A NJ native, is an acoustic act covering all genres of music throughout the years. Southern rock, oldies, classic rock, country, blues, Americana, pop, and everything in between. She’s a well-established musician who plays guitar, piano, and bass.
Danielle has over 25 years of experience playing the circuit and has played many well-known venues including the Stone Pony, The Fast Lane, Crossroads, and Albert Music Hall to name a few.
She has performed at festivals such as Red Bank Riverfest, Central Jersey Charity Beerfest, Wells Mills Jamborees, Asbury Park Porchfest, and the Allaire Americana Festival. She’s participated in benefits and charitable causes including The VFW, Musicians on a Mission, and hosts a benefit every year for the Alzheimer’s Association.
Being involved for many years on the local music scene has afforded her the opportunity to perform on local television programs and has had albums she’s played on air on MTVs (undressed) and local radio.
For more info:
facebook.com/redbirdflyingsolo

4:45pm- ZenAgain – Rocks the hits you want to hear in Spanish and English. Powerful vocals, melodic rock guitar, & dynamic, intricate percussion highlight each show.
Janine (Drums and percussion) and Gloria (Vocals, Guitars), as ZenAgain, have been joined by a multitude of musicians over the last 10 years in Detroit, New York, now California.
These dynamic women played in 3 other bands, performing over 400 paid shows, benefits, & enjoying buskin for fun. Their four-piece rock bands, dónde, and the all-female rock band, 4D, played for packed bars, restaurants, and festivals. Their collaboration with the ultra-talented Kretz and Fong included tight three-part harmonies and folk hits performed acoustically.
www.facebook.com/ZENAGAINACOUSTICS

5:30pm: FEATURING RENEE SANTOS-COMEDIAN/ACTRESS
Los Angelos California!
reneesantos.com
Revving with verve and theatrics, Renée Santos gives you a little bit of everything: funny voices, wordplay, musical comedy, rapturous storytelling. She is a multidimensional, multi-talented, capital-e Entertainer. She endears through natural showmanship, genuineness, and artistic integrity—swearing like a sailor and pulling no punches. She endures personal tragedy, like family drama, pregnancy, and sobriety, through a liberal, lesbian lens, with nuance, passion, intelligence, and forthright humor. The comedian has lived a full life and isn’t afraid to relay it in bold, proud, salty, vibrant, meticulous detail. Renée Santos is playful to the punch, sarcastic to the swerve, funny to the core, and impactful to the soul.
Santos burst onto the national comedy scene 2 years ago with her celebrated appearance in the “outrageous” Showtime stand-up comedy special, “PRIDE COMEDY JAM.” Most recently, she earned a Residency at The Broadway Comedy Club in NYC and performed alongside Comedienne Wanda Sykes in the Dominican Republic for the 40th Anniversary Olivia Cruises Punta Cana Vacation. Although she has a natural funny bone, Santos has also been working hard as an actress. Her credits include the Jerry Bruckheimer produced CBS sci-fi series “Eleventh Hour”, TNT’s new crime drama “Murder in the First” airing June 15th, 2015, and Showtime’s “Californication.” In addition, Santos has 2 commercials airing nationwide for One-a-Day Vitamins and Snackwells, she brings her performing artist resume full circle with her voice-over abilities landing her regular gigs on the ‘looping’ scene, including numerous Disney projects and the NBC hit-series “Brothers and Sisters.
https://www.facebook.com/renee.santos.98871
PayPal.me/reneesantoscomedy
6:15pm- Ashleigh Britton Addison – is a soul songstress… pouring her heart and creativity into her rolling piano, rhythm guitar, hand drums and her emotive voice. She grew up in Tampa, Florida, but traveled with her music all over the country and spent seven years in British Columbia. She may take your soul flying or add salt to your beer but this is a musical and emotional endeavor. Classical Soul Folk.
www.paypal.me/LesleyAddison
venmo.com/code?user_id=2758289418878976231
Cash app $LesleyAddison
www.facebook.com/ThatAmethyst