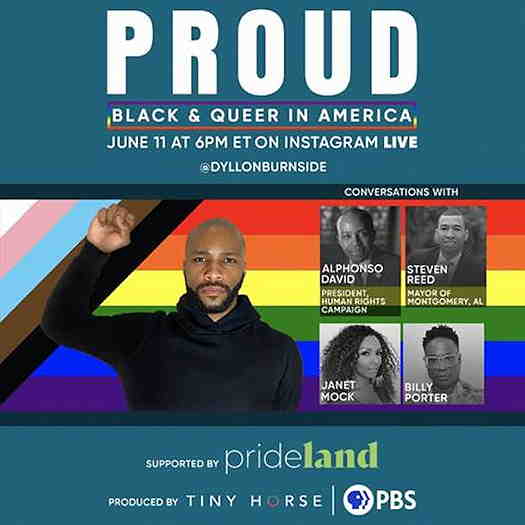 Multi-hyphenate performer and creator and host of PBS’s PRIDELAND  Dyllón Burnside will celebrate Pride Month by hosting a virtual conversation series that will feature Dyllón’s friends and influential community leaders beginning on Thursday, June 11 at 6:00pm ET/3:00pm PT on Instagram LIVE at @dyllonburnside.

Dyllón Burnside is bringing together friends and influential members of the LGBTQ+ and Black communities during Pride month to discuss how interconnected they are and seek ways to bridge the gap between the liberation movements. These conversations will focus on how pride will be celebrated differently this year as well as how to create more collaboration and synergy between the movements for queer lives and Black lives.

With large gatherings still prohibited due to the novel coronavirus, Pride celebrations this year will look different – festivals, parades, and parties will be replaced by virtual gatherings and specials. This conversation series is intended to create a space for necessary conversation with the hope that it can bring an even larger community together in a digital capacity.

The diverse group of participants will include his “Pose” cast mates, members of the media, heads of organizations, influential public figures, individuals who appear on PBS’s new PRIDELAND special and docuseries that Burnside hosts and more. The PRIDELAND broadcast special will premiere on Friday, June 12 at 9:00pm ET and highlights authentic personal stories of individuals across the American South that are brought to life through Burnside’s curious, exploratory lens. These inspiring stories highlight individuals who are doing courageous and vital work in their communities to fight for change and progress.

On television, Dyllón is best known for his portrayal of the beloved character of ‘Ricky’ in Ryan Murphy and FX’s critically-acclaimed and ground-breaking series “Pose.”

WHY: TO BRING TOGETHER FRIENDS AND INFLUENTIAL MEMBERS OF THE LGBTQ+ AND BLACK COMMUNITIES DURING PRIDE MONTH TO CELEBRATE THE PROGRESS THAT HAS BEEN MADE FOR THE QUEER COMMUNITY AS WELL AS GENERATE CONVERSATION ABOUT HOW TO BRIDGE THE GAP BETWEEN LIBERATION MOVEMENTS.

This Livestream can also be accessed at the following sites: