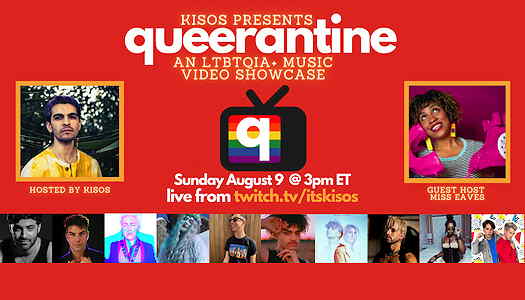 Season two of Queerantine promises to bring fans a whole new line-up of exciting, emerging indie LGBTQIA+ music videos and co-hosts, including Miss Eaves, Megan Lenius, Matkai Burmaster among many others. It will also see the debut of The Official Queerantine Aftershow (airing directly after Queerantine) hosted by Toronto-based pop artist Cory Stewart.

Each week host Kisos sources 10 visuals, that he and a co-host can spotlight and react to — live on Twitch (a well-known video live streaming service operated by Twitch Interactive, a subsidiary of Amazon) while interacting with and inviting an engaged audience to discover new and exciting musical artists in the community.

NYC-based moody alt-pop singer Kisos began his career in music publicity in 2014. Soon after, he translated his first music job into his own publicity firm, Miller Place, while simultaneously cultivating a strong following on live-stream service Twitch (twitch.tv/itskisos).

A regular fixture on outlets such as Billboard Pride, Atwood Magazine, Paper Magazine, Highclouds, and Spotify’s own Cosmic Playlists, Out Now and Discover Weekly; Kisos is a strong, quirky and loveable advocate for the LGBTQ+ community.

Along with hosting several weekly live shows on Twitch, Kisos recently released his sophomore EP which has been streamed over 500,000 times across all platforms.