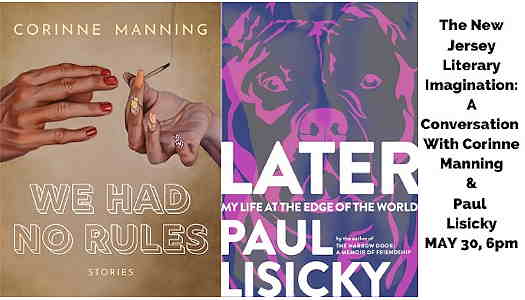 Corrine Manning talks with Paul Lisicky about their new book and together they explore the concept of the “NJ Literary Imagination.”

Corinne Manning was born and raised in Neptune, NJ. Their debut story collection WE HAD NO RULES (Arsenal Pulp Press, May 2020) has received starred reviews from Booklist and Publisher’s Weekly the latter calling noting it “exquisitely examines queer relationships with equal parts humor, heartache, and titillation.” Their stories and essays have been published widely, including in Toward an Ethics of Activism and Shadow Map: An Anthology of Survivors of Sexual Assault. Corinne is a writer in residence for Writers in The Schools and founded The James Franco Review, a project that sought to address implicit bias in the publishing industry. Purchase We Had No Rules

Lisicky is the author of six books including Later: My Life at the Edge of the World, The Narrow Door, Unbuilt Projects, The Burning House, Famous Builder, and Lawnboy. His work has appeared in The Atlantic, BuzzFeed, Conjunctions, The Cut, Fence, The New York Times, Ploughshares, Tin House, and in many other magazines and anthologies. He has received awards from the Guggenheim Foundation, the National Endowment for the Arts, the James Michener/Copernicus Society, and the Fine Arts Work Center in Provincetown, where he has served on the Writing Committee since 2000. He has taught in the creative writing programs at Cornell University, New York University, Sarah Lawrence College, The University of Texas at Austin and elsewhere. He is currently an Associate Professor in the MFA Program at Rutgers University-Camden and lives in Brooklyn, New York. He is at work on a memoir Animal Care and Control. Purchase Later My Life at the Edge of the World

This event will also raise funds for the Asbury Park Transformative Justice Project. Learn more about the work of APTJP and donate here: www.aptransformativejustice.org