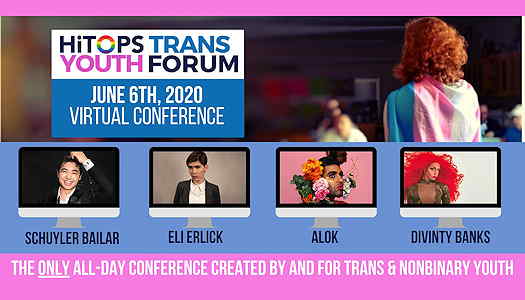 Our HiTOPS Youth Advisory Board, responsible for all programming and content are excited to share this year’s theme, “100 Year Rewind” celebrating progress in the trans community from 1920 until today!

We’ve invited an extraordinary group of inspirational transgender, nonbinary, and gender-expansive leaders to join us!

Schuyler Bailar (he/him/his): The first trans athlete to compete in any sport on an NCAA D1 men’s team, and the only to have competed for all four years. He is an internationally celebrated inspirational speaker and a respected advocate for inclusion, body-positivity, and mental health awareness. Schuyler graduated from Harvard College in May 2019 with a degree in Cognitive Neuroscience and Evolutionary Psychology. His studies focused on social-emotional learning, emotional intelligence, and education. He is a tireless advocate for inclusion through speaking engagements and social media. Schuyler also holds on-going advisory roles with Monte Nido & Affiliates (the leading eating disorder treatment provider) and American Eagle Outfitters (the AExME advisory council) and is a research assistant at Harvard University.

Eli Erlick (she/her/hers): She is the co-founder of Trans Student Educational Resources, the only national organization led by trans youth. After she co-founded the organization at the age of 16 in 2011, it quickly grew to be one of the largest trans groups in the country. Based in New York, she has worked with dozens of different organizations to fight for transgender liberation. She was named one of Teen Vogue‘s New Faces of Feminism, Refinery29‘s “30 Under 30, and Glamour Magazine‘s College Women of the Year. Her work has been featured in hundreds of different outlets and she has published over 100 articles, essays, and book chapters. She is currently completing her Ph.D. in Feminist Studies at the University of California, Santa Cruz.

ALOK (they/them/theirs): They are a gender non-conforming writer and performance artist. Their eclectic style and poetic challenge to the gender binary have been internationally renowned. As a mixed-media artist Alok uses poetry, comedy, performance, lecture, drag, sound-art, fashion design, self-portraiture, and social media to explore themes of gender, race, trauma, belonging, and the human condition. In 2019 they were selected as one of NBC’s Pride 50 and Out Magazine’s OUT 100. They have presented their work at 500 venues in more than 40 countries.

Divinity Banks (she/her/hers): She has been performing for 11 years, gracing stages across the United States. She’s thrilled crowds in Chicago, Orlando, Ohio, and Atlanta (to name a few), as well as recently venturing out to perform on The Royal Caribbean cruise ship, where she raised awareness for equality for all genders, sexual orientations, religious beliefs, and disabilities, as well as safe sex education. She is known as “The Dancing Diva of New Jersey” with unforgettable high kicks, flips, splits, and all-around high energy!

ABOUT THE HiTOPS TRANS YOUTH FORUM

The HiTOPS Trans Youth Forum is an annual event produced by the HiTOPS Youth Advisory Board. HiTOPS is a 501(c)(3) non-profit organization that fosters strong and healthy young people of all identities by providing inclusive and youth-informed sex education and LGBTQ+ support for young people throughout New Jersey.