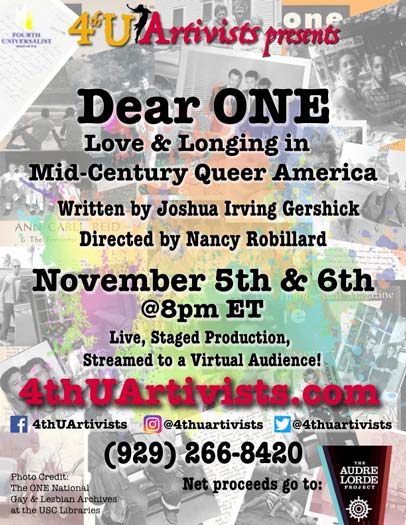 4thU Artivists, a New York City-based benefit performance group, will present their Fall production, Dear ONE: Love & Longing in Mid-Century Queer America by playwright Joshua Irving Gershick, November 5th & 6th as a live staged production streamed to a virtual audience only. Directed by 4thU Artivists’ council member and theater director Nancy Robillard, the piece illuminates the lives of ordinary Queer Americans as recounted through letters written between 1953 and 1965, to L.A.’s ONE Magazine, the first openly gay & lesbian periodical in the United States.

In 2020, San Diego’s Diversionary Theatre produced the play as an audiocast, featuring gay rights icon George Takei. Proceeds from this performance will go to The Audre Lorde Project.