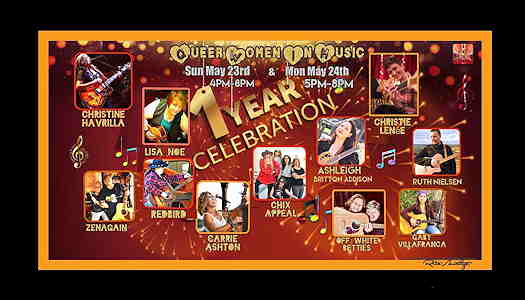 Queer Women is Music is celebrating ONE year since its creation on May 24th, 2020. So glad to have many of the artists who have performed on QWiM throughout the year to come back for an encore performance!

QWiM’s mission is to provide a platform for artists to continue to express their art in lieu of having lost their gigs over the pasts several months. Please keep in mind they are volunteering their time to share of themselves. Please consider a donation to their Venmo/PayPal. The information listed under their Bio which will also be made available during the Livestream!

Ruth Nielsen: Is a music graduate from Leeds College of Music, UK where she studied jazz from 2005-2008. Until then she was influenced by other styles, namely country, pop/rock, acoustic, and gospel. Studying jazz opened up so many new paths and ways to explore music.

Ruth learned how to improvise and this forms her approach to music. Her song choices have a clear personal connection, and be it covers or originals, she always puts her own stamp on songs. Ruth has performed as a piano vocalist since summer 2017 when she also came out in the queer community. She released her Unicorn EP spring 2020 which talks about her experiences and she is now working on her first album. Ruth is a delicate, soulful, and sweet Danish-British singer who will take you on a piano journey with improvised songs that range from jazz, R&B classics, and everything in between. Imagine Carole King meets KT Tunstall. sit back, relax and enjoy the wondrous ride, or feel free to join in!

Chix Appeal: 4:30pm – Chix Appeal is an all-female rock band, pulled from all over the Tri-State area. With sweet leads and solid rhythm section and soulful singers, we always please the crowd. We play everything from Pat Benatar and The Go-Go’s to classic rock and sweet originals! They’ve played all over the city, and most of the Pride Festivals in the Tri-State. Including the Asbury Park Pride Festival in June 2017 and opening up for Asbury Park’s local favorite Christine Martucci at the Wonder Bar in June 2018 and 2019 for Women’s Weekend. Chix’s Appeal has recently received a grant from SI Arts Organization to record their first 4 song EP!!! This 5 person band includes -Cece on vocals, Aileen on bass, Gulya on lead guitar, Mayna on keyboard and vocals, and Andrea on drums. While each member hails from a different part of the Tri-state area, they have one thing in common – a passion for cold, hard, kick-ass rock!

Off White Betties: 5pm-5:45pm – Jean Stewart and her partner Lisa Robertson are currently living in the Orlando, FL area. Originally from New Jersey and Virginia respectively, they began playing together in the ’90s in Atlanta GA. They performed together with various lineups of other musicians throughout the Southeast. They moved to Florida about 5 years ago and established themselves as a Duo. Before this pandemic, they were performing at various resorts, restaurants, and bars throughout Central Florida. Off White Betties are a fun acoustic duo who plays popular cover songs from the past 6 decades. Keeping the audience guessing, they weave through multiple genres throughout each show. With over 20 years of experience, you can expect tight harmonies and engaging performances.

RedBird Flying Solo: 6:00pm – A NJ native, Redbird flying solo (aka Danielle) is an acoustic act covering all genres of music throughout the years. Southern rock, oldies, classic rock, country, blues, Americana, pop, and everything in between. She’s a well-established musician who plays guitar, piano, and bass. Danielle has over 25 years of experience playing the circuit and has played many well-known venues including the Stone Pony, The Fast Lane, Crossroads, Union County Performing Arts Center, and Albert Music Hall as well as local clubs, bars, and private parties. She also has performed at many festivals such as Red Bank Riverfest, Central Jersey Charity Beerfest, Wells Mills Jamborees, Asbury Park Porchfest, and the Allaire Americana Festival. Danielle performs for many benefits and charitable causes including the VFW, Musicians on a Mission, and hosts a benefit every year for the Alzheimer’s Association. Being involved for many years on the local music scene has afforded her the opportunity to perform on local television programs and has had albums she’s played on air on MTVs (undressed) and local radio.

ZenAgain: 6:30pm – rocks the hits you want to hear in Spanish and English. Powerful vocals, melodic rock guitar, & dynamic, intricate percussion highlight each show. Janine (Drums and percussion) and Gloria (Vocals, Guitar), as ZenAgain, have been joined by many musicians over the last 10 years in Detroit, New York, and now California.

Gaby Villafranca: 7:00pm – Hello! My name is Gaby Villafranca and I’m a storyteller. Though my narratives are usually fiction, I believe fictional writing holds a lot of valuable truth. My most meaningful work comes from a combination of my own life experience and various other stories I’ve grown attached to.

It is liberating to sing my own music and create my own stories. But in reality, they aren’t just my stories. They are stories that used to hide out of fear of discrimination, stories that must be told to create a more open-minded and empathetic world. The work of the queer artists before me, from Sappho to Frida Kahlo to k.d. Lang laid the groundwork for me and a multitude of new queer artists to thrive. The world better be ready for us because we’re ready to make the world better!

Carrie Ashton: 5:00pm – is a singer/songwriter since the age of 13. She is currently performing solo acoustic as well as with her band and travels throughout New England and the east coast. She has shared the stage with Natalie Merchant, the Go-Go’s, REO Speedwagon, Antigone Rising, Van Zant, and Lucinda Williams. She has an innate ability to read the crowd and move them with her unique style and charisma, and her energy on stage is hard to ignore. She has also released three albums over the years.

Lisa Noe: 5:30pm – A native Kentuckian and Florida resident, 2020 Creative Loafing Best of the Bay: Singer-Songwriter recipient, Lisa Noe has captivated audiences since the youthful age of 13. Harnessing life experiences and storytelling makes for easy visualization of her music.

She has appeared on WMNF and NPR radio, the Melissa Etheridge Cruise lineup 2018. Lisa has opened for such acts as Betty from “The L Word” and “AG” Adrianne Gonzalez. Her passionate vocals and lyrics have graced her with a large fan base across central Florida as well as Louisville Kentucky.

Christine utilizes the soft gritty texture of her vocals to express warmth and honesty listeners quickly embrace as well as her aggressive, raw, trash-style guitar playing and looping.

Christine has 13 albums, 2 EPs, and over 20 years of touring under her belt, continues to venture out under “Christine Havrilla & Gypsy Fuzz” as well as a solo artist, showcasing ALL of her music with new twists and described as “a blend of ’70s, ’80s, and 90’s rock delivered by the modern singer/songwriter.

Christie Lenee: 6:30pm – “Singer, songwriter, and renowned fingerstyle guitarist, Christie Lenée is more than a musician – she’s an experience. Symphonic compositions flow from her fingertips effortlessly, with sound ranging from transcendental folk-pop to virtuosic instrumentals. She received the title of Acoustic Guitarist of the Year 2019 awarded by Music Radar Magazine out of the UK and was International Fingerstyle Guitar Champion (2017).

She has toured all over the world with a sound ranging from transcendental folk-pop to virtualistic instrumentals, often described as ‘Michael Hedges meets Joni Mitchell and Dave Matthews.”

During the pandemic, Christie is currently working on a solo album in addition to collaborative tracks with artists such as Tommy Emmanuel, Phil Keaggy, and Laurence Juber. In July 2020 she was featured on the Grammy Museum’s virtual program streaming from Los Angeles, along with another 4-page article in Guitar Player Magazine.

With over 17,000 fans on Facebook and millions of plays on YouTube, Christie continues to spread the love of music through live streams, digital airplay, and virtual appearances on television stations. As an artist, she hopes to bring joy, freedom, and light to the world through the love of music.

Ashleigh Britton Addison: 7:00pm – is a soul songstress… pouring her heart and creativity into her rolling piano, rhythm guitar, hand drums, and her emotive voice. She grew up in Tampa, Florida, but traveled with her music all over the country and spent seven years in British Columbia. She may take your soul flying or add salt to your beer but this is a musical and emotional endeavor. Classical Soul Folk.

This LINK will be where the LIVE videos will be available. HOWEVER, if you click GOING, and LIKE AND FOLLOW THE PAGE, you should get A NOTIFICATION when someone goes LIVE!! you shouldn’t have to go searching where the show is.